Does the Breed Standard Require a Rape Rack? 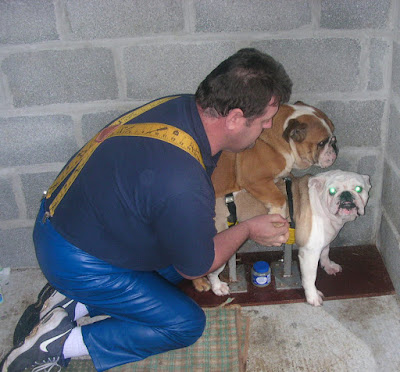 Remember when Michael Vick got busted for dog fighting, and they found "rape racks" in his basement?

It's exactly what it sounds like -- a rack to which a female dog is bound while a male dog mounts her from behind.

In the case of Pit Bulls, the rape racks are supposedly necessary because "some females don't want to be mounted by any old male." Imagine!

Of course, a rape rack is not just used on "awkward bitches," is it?

No, it turns out that's it's also used on dogs that are so deformed they cannot even have sex on their own.

Take a look at the picture at top, or the score posted here where this breed-blind fellow has come up with his own version of a rape rack for British Bulldogs.

Of course he doesn't call it a "rape rack" does he?

No, the more politically correct term is "mating cradle."

And why do you need such a thing? Simple: because the British Bulldogs is a complete and utter mess. As I noted in an earlier post:

"The famed English Bull Dog ... is mostly Chinese pug -- a show ring creation with legs so deformed it can barely walk, a jaw so undershot it cannot grab a Frisbee, and with a face so bracycephalic it cannot breathe. Add to these problems a deformed intestinal system (a by-product of chondroplasia or dwarfism) which makes the dog constantly fart, and a pig tail prone to infection, and you have a dog that considers its own death a blessed relief."

Did you know that the Bulldog is now a "Top Ten Breed" in the American Kennel Club?

And for those know-nothings who claim it's only recent "exaggerations" that have led the British Bulldog to be incapable of having sex, giving birth, or actually running across a field, consider this from Rawdon Lee, an authority on bulldogs writing in 1894:

"It is known that time plays grim jokes on historical monuments.

There has probably never been a dirtier joke, however, than the one played on our national symbol, the English Bulldog.... The lunacy of breeding for extreme exaggeration, for extreme foreheads and huge skulls, for totally exaggerated low-slung front legs, for shoulders pointing outwards at almost a right angle, for Bulldogs with a front wider than that of the opposing bull. None of this used to be the case and only recently came into fashion."


So there you have it: the British Bulldog has been a basket case for more than 115 years!

And what has the Kennel Club (either American or British) done about it?

To which I would only ask one question .... Does the breed standard require a rape rack? 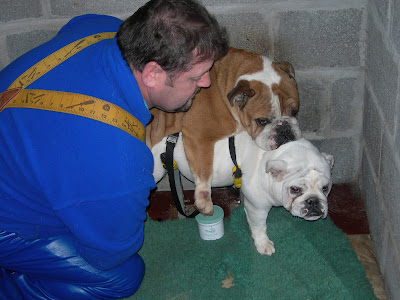 How much longer in the leg, lighter in body mass and pronounced in the muzzle would bulldogs have to get to make these "instruments" of abuse redundant? How much less inbred would they have to be for a more natural sexual appetite to return?

This is so gross.

Many breeders today are going the AI route, primarily for health reasons - to avoid brucellosis and other dangerous diseases - lab screening cuts them out of the mix.

Poor old Bulldogs are really in their twilight these days. Time to infuse some blood from healthier types, I'd say and kiss that ugly mug goodbye.

How about a rule of thumb:

"If, when two dogs are procreating, anyone in the room is wearing electric-blue leather trousers, then something is very, very wrong.

The trousered one looks much more interested in the proceedings here than either of those bored, defeated, brachycephalic piggies.

Also, I shudder to speculate on the contents of the plastic jar.

I've got a breed in which surgical castration is not an impediment to a pair of dogs naturally achieving a mating tie. Which my male (neutered three years ago) and estrus bitch keep proving this week, generally just before I inadvertently walk into a room and "catch them." Whatever. It's their personal lives. Other than arranging dates and driving when we want puppies, I stay out of it; the nitty-gritty is up to the dogs.

Any other way, I figure Nature is stating her opinion, and I'd do well to defer.

THANK YOU for noticing the blue pleather pants! I was wondering if it was just me. He wears them again and again and again with those suspenders -- clearly part of his "dog mating day" get up. And yes, that's vaseline. Two different kinds. The mind does shudder at the thought train that not only dresses for this, and does this, but designs rape racks and then puts up scores of pictures showing him "in coitus" with the dogs.

Heather (who is *really* mean) made me look at this.

What I'm seeing is that the icky pleather pants are more for -- um, how shall I put it.... 'spill control' than fashion. I'm basing this opinion (and thank you God this is purely conjecture) on the weirdly incongruous tape rule suspenders and the *ewwww* positioning of the greeder's hands in all the photos. It *looks like* he's.... how shall I put this... manually helping things along.

I really hope that they wear gloves...

Off to go cure my now damaged psyche with a bit of single malt and pass out with one of Houle's demon spawn, sex-obsessed puppies.

I read that the British Bulldog is the tenth most popular dog breed in the US. How can that be?

I'd like to believe that most pet owners are concerned about having a healthy dog with a good chance of living a natural lifespan and minimal health problems so the level of popularity doesn't equate.

I notice that most breeds that get bad reputations for health problems do eventually decline in popularity.

Here in Australia, Bulldogs are one of the most expensive breeds (because of the difficulties in breeding them I guess) so there's not a lot around.

The pictures are horrible btw.

The rape rack is bad. The blue pleather pants - worse. I think I now need counseling.