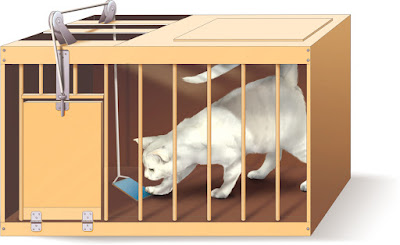 All creatures do not learn the same way, as anyone with open eyes can attest.


B.F. Skinner's work was not quite as original as some would have you believe.

For example, Skinner's theory of operant conditioning was built on the ideas of Edward Thorndike who studied cats and devised an experiment in which he used a "puzzle box" (the progenitor of a "Skinner Box") with latches to test the idea that a cat could learn if rewarded or punished.

Genius or obvious? I will let others decided, but suffice it to say that Edward Thorndike, like B.F. Skinner, believed that all animals learned alike (albeit at different speeds).

According to Thorndike, cats did not learn by watching other cats, nor did moving a cat's paws into place to trip a switch help -- everything had to be done by accident because cats had no insight, and only if an accidental behavior resulted in a reward would it be more likely to be repeated a bit faster the next time around.  All learning was incremental, and all animals learned the same way.

Of course, all creatures do not learn the same way as anyone with open eyes can attest.  For example, right now you are learning about Thorndike's cat box. A cat cannot read, and neither can a dog or a pigeon.  No matter how long you put a dog, cat, or pigeon in front of a computer screen with sentences running into paragraphs about Thorndike's cat box, they are not going to learn a new idea from the symbols.  So, contrary to what Thorndike thought, not all animals learn exactly alike and many animals do have insight, even if that may not be quickly self-evident with cats.

Another point is that Thorndike's "puzzle box" for cats was both coercive and rewarding.  As a general rule, cats hate being jammed into tight boxes with no obvious way out.  By taking a hungy cat and making it uncomfortable, Thorndike increased the chance that the cat would meow, scratch, paw and present with various kinds of distressed behaviors as it tried to get out. If the cat managed to flip the lever on the door of the box, it not only got out, but it was rewarded with food as well.

Was hunger and a desire for food driving the cat to learn or was it aversion to being in a confined space, or was it both?

Both, very clearly -- a cat will work to get out of a very small confined space even if it is not hungry and no food is presented at all.

The point being made here is a simple one:  in the first version of a "Skinner Box," i.e. a "Thorndike Puzzle Box," a low-level but persistent irritating aversive was at work, and that aversive alone was probably as strong as any food reward.

Thorndike saw that, which is why Thorndike's "Law of Effect" has two sides, not just one.