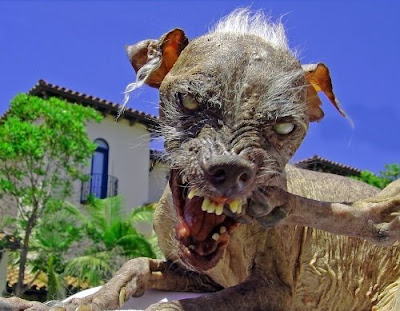 All of the winners of the world's ugliest dogs contests have been Chinese Cresteds.

Well, it's more than the lack of hair on the dog's body, or the odd placement of what little hair that does exist.

It's also the horrible condition of the teeth, and the fact that the dogs appear to have a hard time keeping their tongues in their mouth.

All of this is by design if not quite by intent. 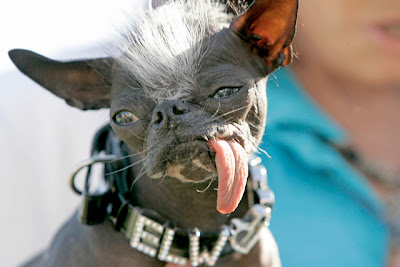 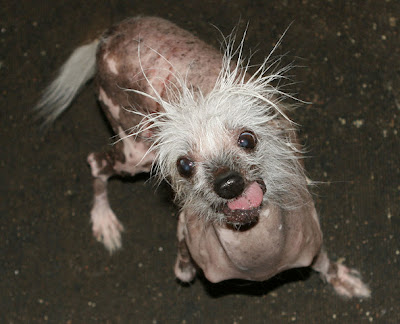 .
You see, when folks are breeding hairless dogs, they are breeding for a specific genetic mutation of the FOXI3 gene, which controls both the development of coat and teeth in all hairless breeds.

Because the gene that controls hairlessness also controls teeth formation, hairless Chinese Cresteds generally have missing teeth, deformed teeth, or misplaced teeth, and it is fairly common for hairless dogs to end up completely toothless at some point in their lives.

As a result, the American Kennel Club standard for this made-in-America breed says that the "Hairless variety is not to be penalized for absence of full dentition."

Chinese Crested dogs, Mexican Hairless (Xoloitzcuintle), and Peruvian Hairless all share the same no-hair and poor-dentition gene mutation, and all are believed to be descended from a single-dog mutation which occurred in the New World some 4,000 years ago. 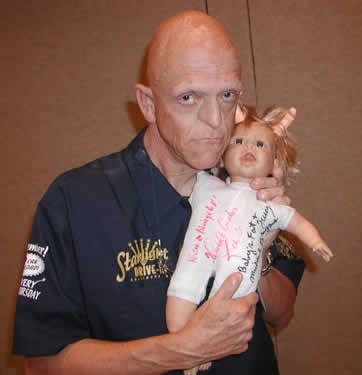 
As with hairless dogs, humans born with ectodermal dysplasia have malformed teeth and extremely sparse hair, and a higher-than average chance of having misshaped facial features and skin and eye abnormalities. This is because, as the National Foundation for Ectodermal Dysplasias (NFED) notes, "The ectoderm contributes to the formation of many parts of the body, including the skin, sweat glands, hair, teeth, and nails. During embryonic development, these and/or other parts of the baby’s body, including the lens of the eye, parts of the inner ear, the fingers and toes, or nerves, among others, may fail to develop normally."

This is not to say that all hairless Chinese Crested dogs look like Zuul the devil dog in Ghostbusters anymore than to say that all humans with ectodermal dysplasia look as startling as Michael Berryman. 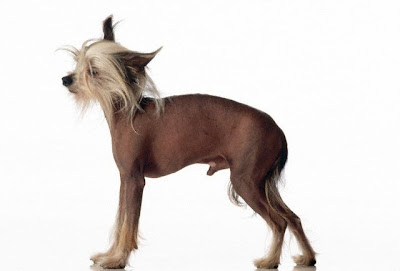 That said, most have teeth issues, and the breed has a relatively short average life -- just over 10 years -- quite a bit less than the number typically stated in the all-breed literature.
.

Actually, many of the recent "Ugliest Dog" winners have been purpose-bred to win the the contest.

I learned this because I was imprudent enough to watch a television program about this; the teevee producers did not see anything wrong with that.

The owners are selecting the most malformed crested they can find, and either breeding them together or breeding them to other deformed little dogs. Then they let them age, so more teeth will fall out and more skin carbuncles will form.

More appalling than breeding a "beautiful" GSD or bulldog to win an ACK show?

I dunno. The ugly dog owners aren't insisting that the crippling deformity is "beautiful."

I agree Heather -- it's all the same thing; breeding rather serious (often painful or miserable deformity) for the human vanity of ribbons.

No matter what the breed, when it's done, it's all the same.

Breeding bulldogs that cannot breathe and show shepherds that cannot walk is no better because some find those dogs visually more pleasing.

That said, I always find it amazing that people who intentionally breed dogs for a lifetime of pain and discomfort will shrink back if you wish the same thing on them and their children.