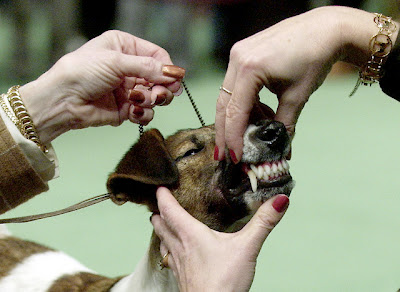 About 18 months ago, or a little more, I got an email from Jemima Harrison a television producer in the U.K. who first came across my name when she was forwarded a copy of Inbred Thinking, a post from this blog.

We shot some emails back and forth, and talked some on the phone about the rise of the Enclosure Movement, Robert Bakewell, Charles Darwin, Francis Galton, John Henry Walsh (Stonehenge), and the rise of genetic loads.

She then went on and chased down some good examples of bad outcomes and some smarter people to talk to (no shortage of those!) and has produced a one-hour documentary for BBC One called Pedigree Dogs Exposed.

I have not see this special yet, but I have been promised a CD in the mail, and the squib is dead-on perfect:

An in-depth investigation into the health of pedigree dogs. This programme reveals the surprising historical reasons that have contributed to problems in some breeds and explores what might be done to tackle these serious and debilitating health issues.

UK and other readers with an international reach would do well to tune in and put out the early word on list-servs, etc.

I think this piece may be an eye-opener for some!

The Kennel Club already has its knickers in a knot, and it has not even seen it yet. Of course, their cry is that it is all bias!

Never mind the list of dog diseases by breed.

Never mind the working dogs that no longer work.

Let's not talk about the dysplasia, the cataracts, and the Cushing's disease. That would be bias.

It's also prejudiced to talk about the rise of skin allergies, the broken hind quarters of the German Shepherd, and the Yorkshire Terriers with teeth popping sideways out of their too-small jaws.

Let's not talk about deafness in Dalmations and Harlequin Great Danes, the advent of "Scottie Cramp" or the rise of "Springer Rage Syndrome."

Oh No!! All that is prejudice.

What is not prejudice is believing that coat color is more important than working abilities.

What is not prejudice is a standard for a border terrier that gives more points to the shape of its head than the size of its chest.

What is not prejudice is the notion that dogs should be judged on looks rather than on health; on a scrap of paper that says it is of "pure blood" rather than its ability to do it job from youth into old age.

That's not prejudice, you see. That's the founding mantra of the The Kennel Club!

It's all about paper and ribbons. It's not about the dogs. It's never been about them. 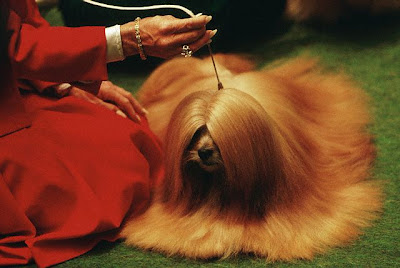 Because I spend some of my life in the outskirts of the "purebred dog world" I probably should not admit this... but I have not owned an AKC registered dog in at least 20 years. And I've had only one. And then only by accident.

In the last couple of decades my beasties have all been purposefully selected from heritage / working / purpose-bred registries that focus on health, temperament and working ability over look.

When I got my last 3 dogs I told the breeders that, for the most part, I did not care what my dog looked like. I cared about the health, structure and working temperament of the pup (and its family).

Independent breed registries (rare as they are now), IMO, represent some of the only true conservators of working dogs extant today. Best are the open registries who base breedability on performance and health over eugenic purity and aesthetics.

But there are vanishingly few of them now - and if, gawd forbid, one becomes successful - AKC begins to lust for them and encourages a greedy few to defect and set up a new 'breed (greed?) club' to betray the purpose of the original registry and popularize the "new", hip, chic, rare breed.

But then maybe I'm just cynical because I've seen it happen with 2 of the breed clubs I was involved with.....

Oh, I would love to see this program. I wonder if the BBC will make it available in this country?

We are eagerly awaiting the documentary. I clicked on the link to the hereditary diseases and while it is impressive it is sadly not complete.

Cavaliers make no mention of the dreaded syringomelia. {Possibly one of the most painful conditions possible. A dog's brain is too large for its skull.

We have produced a succinct little handbook called the Little Black Dog Book which gives a listing breed by breed of conditions you can test against. It also gives information as to consequence with case histories for many of the conditions. It is UK-based but may prove useful.

It is inexpensive and can be bought over the net from http://thefurrygodmother.co.uk - lots of free information is also on this site.

Cavs are genetics wrecks, as I have noted on this blog before. See >> http://terriermandotcom.blogspot.com/2008/05/basketcase-cavalier-king-charles.html


Ronnie Irving, the current head of The Kennel Club, is a third generation border terrier man by the way. His breed (and one of mine) is now among the top 10 dogs in the UK, but they do not hunt much. In fact, it's hard to find ANY working borders around. A few, but not many. See >> http://terriermandotcom.blogspot.com/2005/05/thin-portfolio-of-working-border.html and other posts on this blog.

This version of the statement put out by the KC about Jemima's film appeared on a UK pet owner's forum. Spot on!

"I would just like to announce that in case anyone ever hears of
anything bad said about us, then we would like to publicly point out,
before the bad thing might be said, not of course that we believe
there is any reason whatsoever that anything bad could be said (?)
because we dont think we do anything but good (?), well at least we
believe that we do all we can to ensure that only good things are
portrayed....

Anyway, we would publicly like to point out, as I was saying, just in
case something bad is portrayed about us, what we do, who we are, or
what we might or might not be responsible for, within the dog world,
then we would, as we said before several times, in different ways,
like to point out that we tried really hard to make sure that
everyone involved didnt say bad things, not because it is a fair and
just thing to do, not because that would be educational or beneficial
to the public, or dogs, but because it doesnt really suit us.

We dont like it when bad things are said, because that makes us look
bad. In depth explorations into the very root of what we do, Analysis
of where things might have gone wrong or how they might be improved
is not where we are at! Well, it might be where we are at, if no bad
things are said about us, but given that we dont exactly know what is
said about us we will reserve judgement, but if bad things are said
then like we said before, in lots of different ways, we want everyone
to know for sure that we tried really hard to make sure that that
didnt happen. And in this way, by doing this, hopefully everyone will
see that we are good, for trying to make sure that that is our view,
the "right" view, the only view we feel anyone should ever see, that
is portrayed in the forthcoming programme.

We would like to add that if bad things are said, then that might
affect us in a bad way, but worse than that, it might mean that bad
things will happen to the dogs themselves, damn things, the root
cause of all the flippin problems anyway. And if that does happen,
then we would like to point out that we think bad things happening to
dogs in the future will be as a direct result of anything that anyone
else does within this programme that is contrary to what we told them
to do. The makers of this programme said they wanted to help dogs,
but if by way of their content, not being in agreement with what we
said they ought to say, they draw attention to bad stuff, and say
that bad things have happened to pedigree dogs at any time, then we
would like to point out in advance that we are hereby abdicating
responsibility for anything bad which has or might happen to pedigree
dogs, becasue we think that from now on the problems can be directly
attributed to whatever is broadcast in this upcoming programme. Not
our fault - the programme makers fault.

Unless of course they only say good things about us, in which case we
will remain wholly accountable for all the things that are said
within the programme and portrayed about the dogs featured within it."