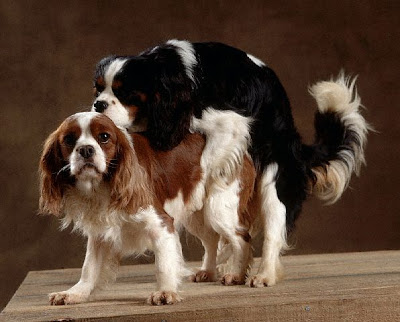 Two Cavalier King Charles Spaniels mating. To read about the creation and wreckage of this breed, click here.


A new study from Imperial College, London has come out supporting the thesis that Kennel Club dogs have been wrecked by 19th Century genetic theories and show practices which remain the foundation stone of The Kennel Club's closed registration system.

This is bad news for The Kennel Club as the Imperial College study (published in the journal Genetics) echoes the conclusions of a one-hour special entitled Pedigree Dogs Exposed to be shown August 19, 2008 and also on the BBC web site.

Even more damning, the Imperial College study uses The Kennel Club's own data to show how inbred modern purebred dogs have become.

The study, entitled Population Structure and Inbreeding from Pedigree Analysis of Purebred Dogs (PDF) was co-authored by two researchers from the Imperial College's Department of Epidemiology and Public Health, an expert from the Waltham Centre for Pet Nutrition, and Jeff Sampson of The Kennel Club, who supplied the underlying pedigree data used by the researchers. The research itself was funded by the U.K. Biotechnology and Biological Sciences Research Council.

For folks interested in learning more about the historical background leading up to current levels of inbreeding (i.e. "How did we get into this mess?") read Inbred Thinking -- a concise history of the historical and intellectual development of the Kennel Club and its closed registry system. A printed version of this article appeared in K-9 Magazine in May of this year under the title of "Will a Closed Registry Lead to Genetic Genocide for Certain Dog Breeds?"

Back to the Imperial College study: What does it say, what data is it looking at, and what are its conclusions?

Golden retriever as so horribly inbred that its impossible to find a good one. And Flat-coats are, too. Goldens are just yellow flat-coats that have been bred to another standard. The Tweedmouth strain of flat/wavy-coated retriever is line from which all golden retriever descend. It was always outcrossed to black wavy/flat-coats and Labradors. At one time, you could get all three breeds in a litter, because the registries were open. This is a sane breeding program. Why is this ignored? We need reform in the dog business. Big Time! Let's hope this study starts a movement for reform.

Very good article. And just think of the damage mandatory spay/neuter laws that are being enacted in some places in the US will do! Especially to the rare breeds that already have a limited gene pool. All in the name of "animal rights"??

The documentary has moved the BBC to review its annual coverage of Cruft's.
BBC ready to dock Crufts coverage after ‘Nazi-style’ breeding

Here's a hint: If a study is printed in an established genetics publication, uses the KC's own data, has a KC official as it's co-author, you MIGHT want to actually post your real name, your real email and your real credentials if you want me to take your rambling stream-of-consciousness comments seriously. My tolerance for nonsense is pretty low, as most people who read this blog know.

No problem. Seems I am the only one that is expected of including yourself:

And I supported everything I wrote so it was no "rambling stream-of-consciousness comments".

Now will you please release the comments or do you practise censureship as well as unfair treament of commenters?

Wendy, I see you are breeder of Irish Setters.

Perhaps you could address your thoughts to your breed, which (according to the Kennel Club's own data at >> http://www.thekennelclub.org.uk/download/1575/hsirishsetter.pdf ) has a death-from-cancer rate of 27 percent and a death from heart failure or defect rate of 10 percent.

Of the 670 dogs reported on in the Kennel Club's health survey, 45% had at least one reported health condition in a population that had a median age of 5 years and 11 months.

You are free to post your rambling dicourse again, but it had nothing to do with the Cabol study that I could see. Perhaps in your haste you did not actually read the Cabol study and missed the fact that it was done with the help of the Kennel Club's own genetic's expert? What is your problem with the Cabol study, and what is your expertise in the area of genetics and/or population dynamics or statistics? Or do you think an uneducated opinion is equal to serious science backed up by peer review in an established genetics magazine? Some people do, no doubt ....

As I recall your long ramble was about the Cheetah population, etc, which has NOTHING to do with the Cabol study, or the subject of this post. It was pretty close to typing and read (to me at least) as stream-of-consciousness from someone who had not even bothered to read the original post.