For John McCain, It's Time to Snap a Jelly Pack 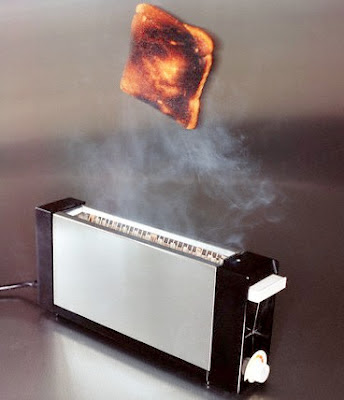 The man's campaign started off slow, went into a water ditch at the first turn, and now the reeds are closing in around him. As he fumbles with the door locks, the water rises around him. It's still early yet, but so far, things are not turning out well.

How bad it it? Consider this: While Barack Obama was giving an exciting and moving speech in front of a massive and enthusiastic European crowd of more than 200,000 people assembled before the Brandenburg Gate in Berlin (crowd video here), John McCain was reduced to speaking in a near-empty supermarket aisle in front of a dairy case in Ohio.

And no, that's not a euphemism; It was a real dairy case.

But wait: it gets worse.

It turns out that the "just-an-average-consumer" that the McCain camp trotted out for the press corps to interview was actually a local Republican party operative.

Apparently the McCain campaign does not know any real people in Ohio. Ouch!

What's funny here is that this "Sausage Hause" appears to be a senior-citizen "Hooters" complete with an accordion player, a tuba player, and a few frauleins flashing just a little cleavage.

Poor John McCain. The romancing of Ohio, is not going well and, according to Real Clear Politics, neither is the rest of it.

Obama is nudging out McCain in Colorado, New Mexico, New Hampshire, and Indiana.

McCain is even getting beat in Arizona fundraising by Senator Obama -- and not by a small margin either.

Meanwhile, McCain's earlier taunting of Barack Obama for having not gone to Iraq in the middle of the presidential campaign cycle, has turned around and bitten the Arizona Senator in the ass.

Partly in response to McCain's challenge, Barack did go to Iraq, where he was greeted by adoring U.S troops, made TWO consecutive 3-point jumps shots, and even had his peace plan endorsed by Iraqi President Maliki.

Just to further gild the lily, the President of Afghanistan welcomed Senator Obama warmly -- along with his proposal to send more troops to Afghanistan to kick the Taliban's ass and actually go out and find Osama Bin Laden.

Osama Bin Laden? Wow ... almost forgot about him. Hmmmm... Wonder what he's up to?

What has been John McCain's response to his free-fall through the stratosphere and into the nether-world of irrelevance?

Believe it or not, it's been to send out an email asking folks like me which of these two videos I liked the best.

And what are these videos? Nothing more than a parade of press commentators saying they are knocked out, admire, and are totally inspired by Barack Obama.

Apparently in the Bizzaro World of John McCain, it's a very bad thing if the press corps (a smart subset of the American people) respect you and are inspired by your words, action and policies.

Woooeeeee! There's a novel political theory! No wonder John McCain is losing! If all you are selling is resentment against the press corps, you have very little to offer.

John McCain, it's time to snap a jelly pack, because you are toast.

I hope that you are right, Patrick. But unfortunately (truly, unfortunately!) I am related to many, many people who forward me *those* e-mails, and you know the ones I mean.

My own mother tells me she hopes I will take the time to find out "the truth" about the man she calls "Hussein Osama" before I vote for him. "The liberal media wants him to win, so they aren't telling the truth," she says.

Finally, in the supermarket last week, an a old woman was pushing her cart in my direction. She noticed I was wearing an Obama '08 T-shirt. A few feet past me, she muttered something out loud: The N-word.

Since I am not black, I assume the T-shirt set her off.

Whiskey. Tango. Foxtrot. And this is in California!

McCain may be running a horrid campaign, but I fear that many people will not vote for Obama because of the color of his skin.

Oh sure -- racism is alive, but it is not well. It is a sick and slowly dying, no longer able to win gainful employment in large parts of the country. It is coughing and on a respirator after a lifetime of smoking cigarettes in a double wide trailer that is still not fully paid for.

Look at the story you yourself told -- "an old woman."

I could not have characterized the problem better.

Some old people, forged in the fires of hate, are not going to change their ways. Older women are a particular problem as many of them were fed fear and mistrust of black folks from the moment they crawled out of the crib. They are like poorly socialized dogs that cannot be fixed; you just wait for them to die and hope they do not do too much damage to the neighborhood until that happens.

In the meantime, however, the gene pool is getting better, and proper socialization of the younger dogs is continuing apace.

Here in Virginia, the home of the Confederacy, the historic cradle of hate, the birthplace of Robert E. Lee, we put a black man in as Governor a few years back. He did a great job. In California, your home state, they put in as Governor a former illegal alien who cannot speak proper English, while in Louisiana the *Republicans* put in as their Governor a fellow with skin darker than Barack Obama's, and who is now being considered as a Vice Presidential choice by John McCain.

John McCain, it should be said, has a child with skin far, far darker than Barack Obama's. See a picture of Bridget McCain here >> http://www2.scholastic.com/browse/article.jsp?id=3748634

Yes, yes, that's right: "John McCain has a black baby." That was the push-poll hate campaign launched by the far right against John McCain back in 2000. See >> http://www.boston.com/news/politics/president/articles/2004/03/21/the_anatomy_of_a_smear_campaign/

Now what's so funny about the willful ignorants who think being cute and clever is as good as being smart and informed (you know the type), is that this "black baby" stuff was the kind of thing these kind of people forwarded to their friends about John McCain back in 2000. They knew it was a lie, but they did not care. They were cute and clever!

And as ugly as that was then, what is even uglier now is that John McCain has decided to crawl into bed with these same people, so desperate is his campaign to win higher office at any cost and by any means.

How is Barack Obama doing in your home state of California, for example? He is up over John McCain by an average of 17.6 pecent according to Real Clear Politics. He is raising more money than John McCain in 43 states. Across the nation, if you add it all up state by state, he is poised for a big win. John McCain has no way of manufacturing the same possibility.

Let John McCain bank his entire campaign on "the hope of hate."

Barack Obama is banking his campaign on something else; the belief that most of us are smart enough to make the right choice.

Imagine a candidate that thinks THAT highly of the American people!

Imagine THAT kind of patriotism -- the kind that truly lifts you up rather than simply pushes others down.

This is what America (and the world) is reacting to.

And it is why John McCain is toast.

Some good news for a change.

Sure, there is always another side - that's what it's all about. Barry won't waste his time trying to convert the hard-core McCain supporters. He'll go for the moderate/undecided voters and hold on to his own supporters.

Thus far, he's batting a thousand (or whatever the basketball equivalent to that is).