Veterinary Billing Without Oversight or Regulation 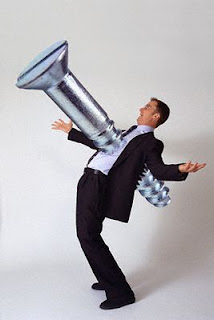 Under federal law, the consequence of ripping off Medicare and Medicaid can be triple damages plus statutory fines of $5,500 to $11,000 per violation. As a consequence, there are a lot of disincentives to ripping off America's health care system -- billions of them, in fact.

And yet, as we all know, the health care system is routinely ripped off, nonetheless.

So, one wonders what goes on in the arena of veterinary care, where the are no sanctions against fraud, where "catch me if you can" is the traditional billing model, and where health-based outcomes are not tracked at all.

Is your veterinarian killing a higher-than-normal number of dogs while putting them under anesthesia for dental work that is not even medically-necessary?

When your vet spays young bitches, do a higher-than-normal number later develop incontinence?

The simple truth is that idea of results-oriented medicine and anti-fraud controls has simply not made its way to the field of veterinary care.

As a consequence, the only thing that stands between you, the customer, and being ripped off, is your veterinarian's conscience (which the AVMA is working hard to erase) and your willingness to get educated and "just say NO" to price-gouging and medically-questionable billing.

How much bill padding, price-gouging and waste goes on in American veterinary care?

Who knows? All anyone knows for sure is that there are virtually NO legal or regulatory disincentives to upcoding, bill-padding, kickbacks, price-gouging and billing for medically unnecessary work in place at the moment.

And if we look at human health care where results-oriented medicine is closely tracked, and where there are sizable legal and regulatory disincentives to fraud and price-gouging, the numbers we find here are not comforting.

Consider this: a new analysis from PricewaterhouseCoopers puts the value of the waste sloshing around in the American human health care system at a whopping $1.2 trillion a year.

That's trillion with a "T," and that number represents HALF of all human health care expenses in this country.

Consider the relative per-capita cost of health care in various countries that are a lot like us to be found on page two of the PwC report (click on table below to enlarge).

What the hell is going on?

Well, the short story is that Americans are being ripped off blind. Back in 1991, I was the person who pitched the story to Mike Wallace at 60 Minutes about how drugs made in America were being sold for one third-the price to patients in Canada, Mexico, Europe and and Asia. Why were the drug companies ripping off U.S. customers? Simple: they could.

Over the last four years, as part of my day job, I have been researching, writing and commenting on massive Medicaid frauds by drug companies, huge frauds perpetrated by pharmaceutical company middlemen, massive hospital frauds, and the payola politics that make it all go around.

I know what percentage of certain types of doctors are on the take from drug companies, how much the kickbacks are on each knee and hip replacement, how ambulance companies and "bill mills" cheat Medicare and Medicaid, and how simple billing scams can add thousands of dollars to the cost of a simple overnight hospital visit.

And yet the questions hang out there ..... Are human doctors less honest than veterinarians?

Are the drug and device makers who sell their stuff to vets an entirely different lot from the human-drug and -device counterparts?

Or, could it be (heaven forfend!) that we dog owners are often ripped off at the vets office, just as about as often as we are at the doctor's office, the pharmacy, and the hospital?

More on that later. In the interim, a word to the wise (which is generally sufficient): Caveat emptor.


** The Billion Dollar Lyme Disease Scam
** Lyme Disease: Hard to Catch and Easy to Halt
** Veterinary Trades Say It's Time to Rip-off the Rubes
** Is Your Veterinarian Clean? Don't Count On It.
** A Season to Everything
** Cruciate Ligament Injuries in Dogs
** Vet Pricing Has Nothing To Do With Care
..

It's scary that the U.S has the worst infant mortality rate amongst them all... and yet our hospitals continue to demonize midwives and doulas as somehow being 'more risky' than giving birth at their medical facilities. The horror stories I hear from many women who have been given abysmal treatment during their births (like performing caesarians just so the doctor can be done faster and move on to the next patient) because of the 'assembly line' style of maternity wards in this country is just appalling.

Everything seems to be done solely for the convenience and profit of the doctors, and the patients suffer. Yet we have the nerve to make cracks about how 'bad' Canada's system is!

I gnash my teeth in anger at this.

We have a local vet who is, in every respect of the words, a thief and a fraud.

Promotes VERY spendy laser surgery for ALL procedures. Clients end up not only with huge bills, but also with huge and bloody incisions that seem to take FOREVER to heal and more complications than the old fashioned surgeries done for a small fraction of the cost by other local practitioners. (with my training business I see a LOT of dogs)

Pushes for unneccessary surgeries like spay/neuter of ALL dogs (hey, if the OWNER is responsible, why does the dog need to be speutered?) and refuses to do important surgeries like removal of problematic dew claws because they aren't politically correct.

A pox on them

How is it that a state-run veterinary school hospital can charge me $5.22 for 1/2 of a 2.5 mg tablet of enalapril when my local pharmacist has only been charging me six cents for the same drug and dosage? In light of that fact I ask is it ethical to keep promoting companion pet adoption without first telling prospective pet owners about the high rate of cancer among dogs and cats, the even higher cost of veterinary care and the painful reality that they may have to euthanize a beloved pet because their vet wants a bigger house and nicer cars

I agree, I think all of us have vets like that, overpriced. My dog has to have human heart meds just to stay alive. Even without insurance, it's cheaper to buy them in human form, the same company makes them for dogs (and at a lot less dose) they are still marked up incredibly by the vets. damn them.