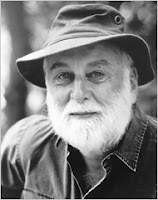 There are people who wrote books that are important to me. Colin Fletcher was one of those people. This obituary is from The New York Times.

"Down to Gehenna,
Or up to the Throne,
He travels the fastest,
who travels alone."
- Rudyard Kipling


Colin Fletcher, whose ornate prose and prosaic tips on subjects like choosing the right hiking boots helped start the modern backpacking movement, died June 12 in Monterey, Calif. He was 85.

Mr. Fletcher died as a result of complications of head injuries he sustained in 2001 when he was struck by a car while walking near his home in Carmel Valley, Calif., said Chip Rawlins, who helped Mr. Fletcher write the fourth edition of "The Complete Walker" (Alfred A. Knopf, 2002). Many wilderness enthusiasts consider the work to be the hiker's bible.

First published in 1968, the book has sold more than 500,000 copies and remains in print. So, too, have two of the seven other books that Mr. Fletcher offered as paeans to soul-restoring and solitary strolls through the hinterlands. Hiking, he wrote in "The Complete Walker III," is a "simple, delightful, intended-to-be-liberating-from-the-straight-line-coordinates-of-civilization pastime."

Effusive and prolific throughout his career, Mr. Fletcher finished his next best-known book, "The Man Who Walked Through Time," the same year that he published his original walker's guide. In it he recounts his 1963 journey within the rim of the Grand Canyon. He negotiated its steep trails, rock falls and river currents, which extend 200 miles on the map but encompass more than 400 zigzag miles on foot.

"I was hopelessly insignificant and helpless, a mere insect," Mr. Fletcher wrote of his first night in the canyon.

"I saw that by going down into that huge fissure in the face of the earth, deep into the space and the silence and the solitude, I might come as close as we can at present to moving back and down through the smooth and apparently impenetrable face of time."

Mr. Fletcher also offered practical advice: how to arrange campsites, cook meals and, most importantly, pack a knapsack. His main point, Mr. Rawlins said, was to "reduce the weight of virtually every item in one's outdoor inventory."

You are "carrying your house on your back," Mr. Fletcher wrote. Although "the best roof for your bedroom is the sky," a light tarp is better than a tent. Among his other suggestions: trim the handle of your aluminum pot and even that of your toothbrush.

"Colin was sort of the founding father of modern backpacking, the first person to write about going out for an extended period and being self-sufficient," said Annette McGivney, the Southwest editor of Backpacker Magazine.

"A lot of men were coming back from Vietnam," Ms. McGivney continued, "and looking for some alternative to the regular American life." Because people began following Mr. Fletcher's advice, "the book could be credited with starting the backpacking industry," which includes gear makers and her own magazine, she said.

Often, Mr. Fletcher flavored his advice. "Even if you're in the most remote desert, he said to pack some good wine and delicacies," Ms. McGivney recalled. "Claret was his favorite wine; his favorite delicacy was smoked oysters."

Mr. Fletcher was born in Cardiff, Wales, on March 14, 1922, the only child of Herbert and Margaret Williams Fletcher. After high school, he joined the Royal Marines and served during World War II. He went to Africa after the war and worked on a farm and as a road builder in Kenya and Rhodesia. Then, in the early 1950s, he went to western Canada to work as a prospector. In 1956, he moved to San Francisco, took a job as a janitor and began hiking in the hills north of the city.

Two years later, to contemplate whether he should marry his girlfriend, Mr. Fletcher took a long hike - from Mexico to Oregon. It inspired his first book, "The Thousand-Mile Summer" (Random House, 1964). The marriage lasted a few weeks.

In 1981, Mr. Fletcher published what he considered a reflection of himself, "The Man From the Cave" (Knopf). It chronicled how, after finding a trunk and sparse belongings abandoned by someone in a desert cave in Nevada, he spent years piecing together the life story of "Trunkman," who turned out to be one William Simmons.

Mr. Fletcher said he felt connected to Mr. Simmons: "We both valued solitude and silence and square, smoothed-off granite boulders."

We've lost a good man. His Complete Walker served me well during my late high school and early college years. Not only was it an excellent field guide,but good philosophy and just plain fun to read.

I've read it and some of the later reprints off and on through the years. Now will have to read it all over, this time with a bit of sorrow in my heart.