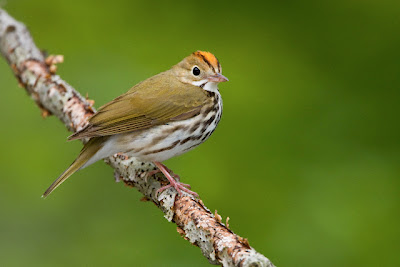 OvenBird
This was written in 2003 for a major environmental organization.
The decline of neotropical migrant song birds in the U.S. was first noticed by birders in Washington, D.C.'s Rock Creek Park, a small federally-protected enclave nestled along a stream bed in Washington, D.C., just 15 miles from Fairfax County.

Breeding Bird Surveys from 1947 through the 1970s, revealed that the yellow-billed cuckoo and yellow-throated vireo -- as well as the northern parula, black-and-white warbler, Kentucky warbler, and hooded warbler -- were disappearing. Six other migrant song birds -- Eastern wood-pewees, Acadian flycatchers, wood thrushes, red-eyed vireos, ovenbirds, and scarlet tanagers -- had declined by more than 50 percent.

Domestic forest destruction was ruled out, as Rock Creek Park had suffered no substantial encroachment in decades.

An analysis of radar images, done in the early 1980s, however, showed only half as many birds were flying to the U.S. from Mexico's Yucatan as had been migrating just 20 years earlier. Clearly, some part of what was happening to "our" birds was happening overseas. Experts theorized that much of the song bird decline, now being documented across the U.S., was due to forest destruction in Central and South America.

In fact, forest destruction in Central America was proceeding at a very rapid pace, driven in no small part by truly sobering rates of human population growth. In the Peten region of Guatemala, for example, 77% of the original forest cover still existed as recently as 1977. By 1980, however, that number had fallen to 42% and by 1989 just 29 percent of the original forest cover was gone. Scientists now believe as little as 10% of the forest may be left by 2025.


Evidence from the U.S.

By the late 1990s, however, scientists began to realize that forest destruction in Central and South America did not tell all of the story. Analysis of migrant song bird populations at the national level showed that birds loss was not evenly distributed across the U.S.

While most migrant song birds are experiencing clear negative trends east of the Mississippi River, and along the thin coastal strip of the West Coast, neotropical migrants seem to be doing fairly well on large tracts of forested land in the West.

An overlay of neotropical migrant song bird decline and a map of federally protected lands, showed a fascinating pattern: migrant song birds were not in general decline in our national parks, our national forests, or on lands managed by the U.S. Department of Interior's Bureau of Land Management. Migrant song birds were in general decline in the east and in the Midwest, however, where changing agricultural practices and increasing levels of forest fragmentation seemed to be having a real impact.

Scientists looking for clues to song bird loss in Rock Creek Park began to look at the forested areas immediately surrounding the suburbs of Washington, DC, and what they found was pretty startling. Between 1980 and 1995, Fairfax County saw 69 percent of its forests converted to homes and businesses.

While scientists had been puzzling over bird loss in Rock Creek Park, just 15 miles away, Fairfax County's forests had been vanishing under asphalt at an astonishing rate.

Scientists now recognize that these once-vibrant suburban forests were probably the principal "home" of many of the birds that had once been seen in Rock Creek Park. Rock Creek had merely served as way-station between larger forest blocks that once ringed the Washington, DC area.

Once large blocks of unbroken forest are being shattered into increasingly smaller fragments, allowing such meso-predators as crows, jays, raccoons, possums, feral cats and fox to prey on once-secure migrant song bird nests. In addition, increasingly fragmented forests have enabled the brown-headed cow bird to colonize areas they once would have found unattractive.

Cowbirds nest at the edge of forests and feed in farms fields and pastures. Though native to North America, the brown-headed cowbird was once confined to the forest edges of Midwestern prairies where they fed in grasslands grazed by roaming bison. Today, however, because of widespread forest fragmentation, parasitic cowbirds can be found all across the United States.

The brown-headed cowbird is a parasitic nester, which is to say it builds no nests of its own, but instead lays its eggs in the nests of other birds -- most frequently in the open, cup-shaped nests of neotropical migrants. A single cowbird may lay as many as 80 eggs in a breeding season - one or two eggs per songbird nest. Because cowbird chicks hatch earlier, and are much larger than the offspring of migrant songbirds, they are able to out compete songbird chicks for food, and often simply push them out of the nest altogether.

In the end, a single cowbird may prevent 20 to 30 warblers, finches and vireos from raising their young. If the bird species has a short nesting period, it may not be able to hatch out a second brood that year, in which case that species may fall off rapidly in that area over a relatively short period of time. 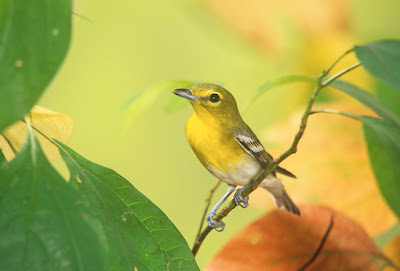 While a great deal of population-driven environmental damage has already occurred in the suburbs of Virginia, more population growth lies ahead. Fairfax County's population continues to grow rapidly, most of it driven by a combination of internal domestic migration (military and government families coming to support a burgeoning government and high-tech corridor) and international migration.

Fairfax County may be a demographic "canary in a coal mine" signaling where the rest of America may be headed in terms of land use patterns and population growth. With U.S. population growing by more than 3 million people a year, and suburban sprawl gobbling up more than 500,000 acres of forest and farmland every year, the pace of habitat fragmentation is likely to increase rapidly in the years ahead.

Under the Census Bureau's middle-series projection, which assumes that current U.S. immigration and fertility levels will stay about the same, the population of the U.S. will increase by 120 million people over the course of the next 50 years. About 63 percent of this future population growth will be due to immigrants and the children of immigrants that have not yet arrived in the U.S. -- the remaining 37 percent of population growth will be driven by demographic momentum as current U.S. residents move to complete their families.

One hundred and twenty million people is a very large population to add to the U.S. over the course of the next 50 years. To put this number into perspective, this is a population equal to the current populations of California, Oregon, Washington, Idaho, Colorado, Montana, Arizona, Nevada, New Mexico, Texas, Wyoming, Utah, North Dakota, South Dakota, Nebraska, Kansas, Oklahoma, Minnesota, Wisconsin, Iowa, Missouri, Arkansas, and Louisiana combined.

In addition to sprawl directly driven by population growth, the U.S. can expect to see increased forest fragmentation due to more and more folks moving farther and farther out into the countryside, abetted by high-speed internet hookups, satellite television, and light rail systems feeding into an ever-expanding network of four, six and eight lane highways.

As Canadian real estate agent Ozzie Jurock noted in an article for The Vancouver Sun (June 30, 2001),

"People throughout North America are on the move. Population growth in smaller towns is exploding. Californians move to Oregon and Arizona, New Yorkers joke at the rain but moved to Washington. The ski resorts and lakes are teeming with 'former' city slickers clutching cash and the hope for the elusive 'better quality of life."


Why the Fairfax Bird Loss Story is Important

Bird population data are such a robust metric of general environmental health that in the United Kingdom they are used as an official indicator of environmental sustainability.

In the case of neotropical song birds, population-driven habitat decline along the entire migration flyway -- including the United States -- has had a serious impact on U.S. song bird numbers. The decline of songbird species in the U.S. is a powerful reminder that population pressures beyond our borders really do "come home to roost" and that reducing the rates of population growth at home, and abroad, is a real and serious "back yard" environmental issue.

Ironically, even as many bird populations are in decline, the number of Americans interested in birds is on the rise. The National Survey on Recreation and the Environment found that over 71 million Americans are recreational birders, up 250 percent from 1982, making birding the fastest-growing outdoor activity in the U.S. 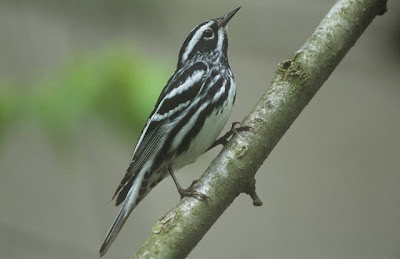 My little corner of the world has swelled around my modest home and farm. We have deer turkey,coyotes, coon, fox, ground hog mink and song birds galore. But the houses and people keep coming. We have been asked to sell our farm for houses and streets, but my father invested in land for its use and care sothat it could be farmed and hunted and fished and experienced. We use it to introduce young people to the wildlife and their first experiences with hunting, fishing, farming, gardening. I leave wild places for the animals and have invested in warm season grasses and native plants. My efforts have been rewarded by my own family loving the outdoors and the world that God created as well as others children who have experienced its magic. Hope to preserve it, but I don't know if I will pull it off. Thanks for your blog. Real People, honest people,straight forward people make a difference david greeneville, tn no boundary ministries.

Eloquent post, John/David. I think there's a reason your name is "Greeneville". "Just say no" to development. And keep sayin' it! Good luck!