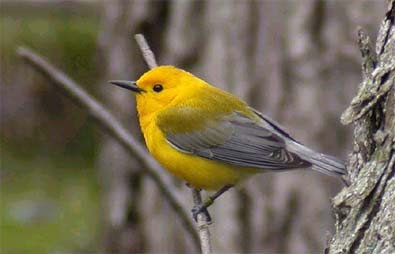 The latest news out of Texas this campaign season (June 2016) is that the the U.S. Fish and Wildlife Service has denied a petition to delist the golden-cheeked warbler, a 5-inch, black-and-white bird with a bright yellow face.

This news comes to my door as large number of warblers arrive from the south, delayed a few days perhaps by the rain and cold we have had in the last month.

The weather seems to change every day now, with cold and warm fronts crashing into each other, and the resulting squalls bringing flocks of small birds north on the winds.

The warblers are returning to Virginia in droves. They are more visible now than they will be later on when the foliage will obscure them high up in the trees. You have to look carefully among the mixed flocks of returning chickadees, titmice, and nuthatches to find the warblers, but they are there.

Warblers are very important birds, as they are the primary insect eaters in North America's woods. The bad news is that most warblers are in rapid decline over vast portions of the U.S. due to forest fragmentation which is occuring both in the U.S. and overseas where "our" warblers spend the winter. I have written a bit about that in the past.

Something I have not written about before is how warblers have shaped presidential politics. In fact, it is not too much to say that "warbler controversies" have led directly to two presidents being elected to office.

The first president to have his early career shaped by a warbler was Richard Nixon.

Back in 1948, Whittaker Chambers, a senior editor at Time magazine, and a former Communist spy turned government informer, accused Alger Hiss of being a spy for the communists in the mid-1930s.

Chambers was not exactly a credible witness; he had very little documentation to back up his charges and he admitted at the Hiss trial that he had repeatedly committed perjury on other occasions. Inititially it was not clear he had even met Hiss, much less knew him well.

Chambers claimed he did know Hiss, and backed it up by noting that Hiss was a bird-watcher who was very proud that he had seen a prothonotary warbler near Glenn Echo Park just outside of Washington, D.C.

In cross examination of Hiss before the House Committee on Un-American Activities (HUAC), a young Congressman by the name of Richard Nixon asked a seemingly innocent question: "What hobbies, if any, do you have, Mr. Hiss?"

Hiss answered that his hobbies were "tennis and amateur ornithology." Congressman John McDowell then jumped in an asked Hiss whether he had ever seen a prothonotary warbler?

Hiss walked right into the trap, responding that he had -- "right here on the Potomac."

Slam -- the trap had been tripped. Committee members were now convinced it was Hiss who was lying, not Chambers. After a series of trials, Hiss was sentenced to prison for 5 years based on very sketchy (and still controversial) evidence.

As for Nixon, he managed to use the Hiss affair to propel himself from the U.S. House of Representatives into the Senate, and from the Senate into the Vice Presidency under President Dwight Eisenhower.

The rest, as they say, is history.

The saga was was not quite over, however. In 1952, not quite content to let his 15 minutes of fame pass him by, Whittaker Chambers published his autobiography, which was entitled Witness. Ronald Reagan later credited this book with transforming him from a New Deal Democrat into a conservative Republican.

While shilling for General Electric in the 1950s and early 60s, Reagan made frequent references to Whittaker Chambers in his speeches, and on March 26, 1984 -- 23 years after Chambers had died -- Reagan posthumously gave Whittaker Chambers the nation's highest honor, the Medal of Freedom.

Probably no one has ever deserved it less. 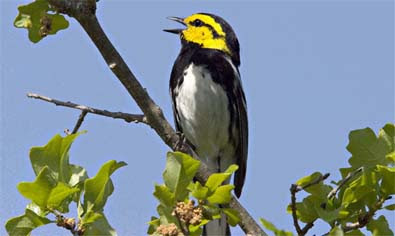 
Another President propelled into office on the wings of a warbler was George W. Bush.

In June of 1994, a memo from the U.S. Fish & Wildlife Service was leaked. The memo outlined a tentative plan to declare hundreds of thousands of acres across 33 counties in Texas hill country as being "critical habitat" for the endangered Golden-cheeked Warbler.

It was feared that, if implemented, "the plan" would have made it virtually impossible to bulldoze Ashe Juniper off of the surrounding hills -- a necessity if those hills were to be turned into nice new housing developments with grass lawns and underground sprinkler systems.

Massive opposition to the informal Fish & Wildlife Service proposal sprang up overnight, with school auditoriums quickly filled to capacity by ranchers, developers, and property owners who were led to believe that the draft proposal was soon going to be made into law overnight, and that it would impact almost all private property.

In fact, the proposal was a mere internal memo within the agency (no rules or regulations had been written or circulated, and no draft Environmental Impact Statement had been initiated), and the designation of critical habitat directly affected only actions that were to be federally funded or authorized, not privately-held lands.

George W. Bush was not a stickler for the facts (then or now) and he jumped on the wave of misinformation circulating through Texas in order to fan the flames of discontent. Positioning himself as a champion of the property rights movement, Bush hammered on the "federal land grab" even after Interior Secretary Bruce Babbitt had disavowed the leaked memo and Texas Governor Ann Richards also voiced her strong opposition.

Richards, of course, was too late. Bush campaign operatives -- including Karl Rove -- had already framed the issue and associated Ann Richards with it -- never mind the facts, or her true position.

Texas being Texas, and modern political discourse being what it is, people believed the Bush Campaign's spin.

In the end, due in no small part to the warbler controversy, George W. Bush was elected Governor of Texas, which he later used as a stepping-stone to the White House.

And the rest, as they say, is history, written in debt, blood, and destruction
.

Absolutely facinating stuff! Where do you come up with the ideas to write about that and what kind of research goes in to it? Very, very impressive.

I lay it all at the feet of insomnia. Most of this stuff gets written between four and seven in the morning and one inquiry leads to another based on seasons, conversation, stray readings, etc. As John Muir once noted, if you pull on any one thing in nature, you find it's connected to everything else.

I think you could write an entire book about the role of wildlife in American politics. You could no doubt do the same in the UK. It's actually amazing it's not been done yet. Or maybe it has. If anyone knows of such a book, shoot me an email as it would make for an interesting read.

So I'm not the only one up until wee hours with books and computer? Glad to find I'm in good company.

Oh, and we have lots of Yellow-Throated and Cerulean Warblers here. This is the first year we've seen them. Must be the cool spring. Sunday the dogs and I had a wonderful surprise and saw a Whooping Crane on a hike along the Mississippi River. Wonderful!