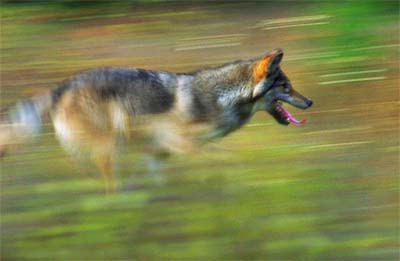 Two re-posts today from more than a year ago, as the "A Man Among Wolves" series is back on TV with a new load of dreck to amaze small children.

Here's what National Geographic does not tell you about Shaun Ellis and "A Man Among Wolves" premiering on television tonight:

In the end of watching "A Man Among Wolves," we are left with only one important question: What moron agreed to put this dreck on TV and make a laughing stock of the valuable National Geographic brand?

You make some very good points.

Is this the guy that cooks the inside of animals, and the places it back inside the animal to eat with the wolves? what an idiot!

You`ve got it right. Not only he is not a scientist, but also his actions in Poland shouldn`t be called research programme. Polish livestock killed by wolfs are due to 100% refund to farmers, so they never thought about killing wolves. This kind of "rescuing polish volves" agenga is a big, big manipulation.

Most of the comments on that staged "documentary" are riddiculusly affectionate, but the truth is that father of four should be an alpha mail outside the cage....

Hey, I TIVO'd the show and tried to watch it, found it painfully stupid and turned it off after five minutes. I appreciate your comments validating my gut reaction to this moron.

There are "elk" in Britain. The Red Deer species is Cervus elaphus. The American "elk" is also considered a member of the Cervus elaphus species.

BTW, I thought this was the worst National Geographic program ever.

As the words are commonly used in the American english language, "elk" are elk and "moose" are moose. Moose are only called elk in Europe.

If we go to Latin names for animals, scientists no longer (as of 2004) count elk and red deer as the same species, basd on DNA analysis. The American elk (or "wapiti", if you prefer) is Cervus canadensis and the red deer is Cervus elaphus. The closest species to the North American elk is a species found in China and Siberia.

I'm not surprised about the inaccuracies. The majority of National Geographic is now owned by Rupert Murdoch and the News Corporation. Say goodbye to quality programming.

you make some good points and I definitely agree. however, the first three items on your list are actually quite clear in the National Geographic special -- or, at any rate, they seemed so to me.

as is the skepticism of most scientists interviewed in the special, whose responses all seem to include some version of "I have nothing against Shaun, but..."

"BTW, I thought this was the worst National Geographic program ever."

Well, it's right up there then with the idiotic Treadwell grizzly stuff. Arghhhh!

Thanks for posting this. Like some others noted, my stomach could only handle a small dose of the "wolf man" but the bit I saw convinced me that the guy is nothing more than a publicity-hungry freak of nature.

He taught those wolves to fish, though. He read about it Never Cry Wolf by Farley Mowat, which is a nice piece of nature writing but very poor science. Wolves do not live on mice. They do occasionally fish. In British Columbia, there are wolves that do rely upon the salmon for a part of their yearly diet.

Most people barely understand dog behavior, and I don't think the public really knows what to do with a dog with much a stronger prey drive, much lower tainability, and much higher creativity than the average domestic canine.

The Dutchers did have a good set of documentaries, but the animal rights people they had working for them have unleashed all sorts of sour grapes on them.

I love it how they classify him as "A wolf behavior expert who conducts research". He's a Freakazoid who wants to be a wolf so he can act out his twisted inner fantasies under the disguise of research. There are so many Wolf documentaries I've personally viewed, of normal interactions by actual scientists with degrees and it doesn't involve pretending to be a wolf. We already knew Wolf's have a very intricate social structure. I have not learned one thing from this man's so called research other than there are some real sick people out there.

Everyone is entitled to have his/her own opinion. That's a very good thing I think. I'm from Holland and I've been to England, to Shaun Ellis and I've read all his books and since I'm a dogtrainer, I use many things I've learned from him and it does work. He's very honest. He explains why he does what he does and why he is in a Zoo, etc., etc. He doesn't pretend he's a scientist or knows best (like some other scientist/trainers/ whatever they are do suggest. He knows he never can be like a wolf, because he's human. He explains why he cooks the liver and why he isn't the 'alfawolf', but a 'teacher'. Don't forget that televisionmakers leave things out and can give an certain image. If you really want to say something which is based on actual facts, go to england and see and hear for youtself and than say all the things you teel here. I think he's being dragged true the mud and I think it's a pitty, because if you close your eyes and don't look further, you might miss something good. I don't like Cesar Milans methods so much, bu he's coming to Amsterdam and so I first want to see and hear it for myself and then I can tell if he's a phony. For now I think he to has many things I have an aversion to, but also he has some good things. I hope my english is understandable, because reading it is easier than writing it. So far my opinion on this subject. I just had to react, because I think you do him no justice.

kwispelsenzo, unlike Holland which has not had wolves for 500 years, we still have them, and I assure you this program is an embarassment to wolves. I also assure that Sean Ellis is an embarassment to himself (he abandoned his wife and four kids), and this show is an embarassment to National Geographic. Can you learn from him? Apparently, and good for you. But it doesn't change the fact that this is fake stuff, not science, and complete crap from a a wolf ethology point of view. See http://terriermandotcom.blogspot.com/2007/05/pathetic-human-of-year-award.html for more

I understand the author's views on captive wolves, but to understand the background of Ellis' intentions with the captive wolves, you have to read his book, "The Man Who Lived With Wolves." He spent years in the wild gaining the trust of a wild pack, and then subsequently playing nanny for the cubs. No, breeding wolves into captivity for entertainment is not right, but breeding wolves to keep certain threatened species alive and to teach humankind about wolves is much more admirable. Depends on what slanted view you take on it. But I suggest that you do more research before taking such a harsh view. For instance, I admit that I have not seen the show and therefore I don't know how it portrays Ellis and his wolves, but I have read his incredible personal story. I believe that the novel speaks volumes more to the project than the series might (based on the authors' opinions on the show).

1) Ellis showed up in Idaho and essentially worked for free at a captive-wolf tourist trap, living on candy and coffee. He worked a couple of months and then disappeared, and showed back up again a year later. In America, we call these people "romantic drifers" and we do not take them too seriously. Go to the place where Ellis claims to have been so integral, and you will not find a single mention of him!

2) Ellis was a shit cleaner, food mixer, and general go-fer at the Nez Perce captive pet wolf tourist trap. He did no research and has no formal schooling in zoology or wildlife.

3) Ellis did not "infiltrate" a "wild" wolf pack. That cannot be done, period. What Ellis did do was pass through a secure gate into a fenced enclosure with VERY human-habituated wolves. These wolves were given to the Nez Perce by Jim and Jamie Dutcher who raised them from pups in a similar enclosure in order to film them for a largely fake documentary about "wild" wolves. At the end of the filming, the Dutcher's gave the wolves to the Nez Perce which have used them as a tourist draw ever since. You can read a quick summary here >> http://en.wikipedia.org/wiki/Jim_Dutcher

4) As for the Wildlife Education Center today, it is a tourist attraction with six wolves, and not much more. The web site features no research but does sell T-shirts and mugs and you can schedule your tour bus visit.

In short, it's the same fake game park Ellis "stars" in over in the UK.

A further point: Wolves are not an endangered species in North America, and in fact we now have a hunting season for them in several states.

Ellis is not protecting a species, and he is not doing research.

His experience with wolves, outside of short comical decampment to Poland, is with captive wolves in cages at tourist traps.

How little the media care for intrinsic worth or scientific accuracy, given chance to film people doing bizarre, pointless things. News, not.

Correction: Ellis did not teach the wolves to fish. It wasn't behavioural science it was

I'm paraphrasing the "unique and complex language of wolves", obviously. Do feel free to test it by putting goldfish in bucket for your spaniel.

I noticed shots of Yellowstone chap cut with Ellis, looked almost like a discussion but no shots of both, hmmm, I wonder...

Devon park now have nothing to do with Ellis, who used publicity to set self up offering half-bred wolf "experiences" and dog whisperer training.

Elk (or moose if you like...) in Poland under threat from hunting lobby using excuse of road traffic collisions, they could use help. Perhaps Ellis can live in ditches by roads making wolf noises to scare elk(moose)/truckers(hunters)? Or perhaps they'll cut wider verges like scandinavians do...

This guy is an idiot. He is a cheat to his wife, i saw him in a brothel in Plymouth in 2010 and it was definitely him.