Turning Japanese ... I Really Think So 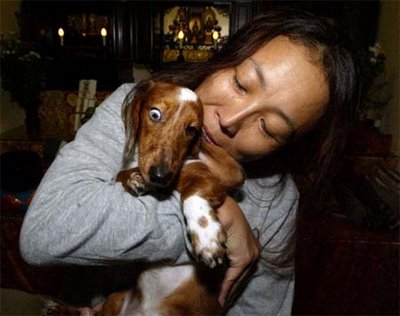 What do you get when you cross the trendyness of Paris Hilton and Britney Spears, with the displaced maternal instincts of people without children, and the aggressive inbreeding of tiny dogs?

Here's a hint: It's not a pretty sight.

Today's edition of The New York Times notes that these three disasters have slammed into each other in Japan, where (to quote the title) "A Pet Craze Leads to Genetic Defects." The International Herald Tribune has the same article >> here.

Care for a Chihuahua with a blue hue?

Or how about a teacup poodle so tiny it will fit into a purse — the canine equivalent of a bonsai?

The Japanese sure do.

Rare dogs are highly prized here, and can set buyers back more than $10,000. But the real problem is what often arrives in the same litter: genetically defective sister and brother puppies born with missing paws or faces lacking eyes and a nose.

There have been dogs with brain disorders so severe that they spent all day running in circles, and others with bones so frail they dissolved in their bodies. Many carry hidden diseases that crop up years later, veterinarians and breeders say.

The New York Times puts part of the blame on a strong Japanese passion for fads and conformity, but does not shy away from the displaced maternity issue:

Some veterinarians and other experts cite another, less obvious factor behind widespread risky inbreeding in Japan’s dog industry — the nation’s declining birthrate.

As the number of childless women and couples in Japan has increased, so has the number of dogs, which are being coddled and doted upon in place of children, experts say. In the last decade, the number of pet dogs in Japan has doubled to 13 million last year — outnumbering children under 12 — according to Takashi Harada, president of Yaseisha, a publisher of pet industry magazines.

“Households with few or no children are turning to dogs to fill the void,” he said. “For a dog to be part of the family, it has to be unique and have character, like a person.”

Indeed, many of these buyers want dogs they can show off like proud parents. They are willing to pay top yen, with rarer dogs fetching higher prices. Coveted traits like a blue-tinged coat are often the result of recessive genes, which can determine appearance only when combined with another recessive gene.

Inbreeding is a quick way to bring out recessive traits, as dogs carrying the gene are repeatedly mated with their own offspring, enhancing the trait over successive generations.

When done carefully, some types of inbreeding are safe. But in Japan, all too many breeders throw aside caution in search of a quick profit, experts in the business say. In these cases, for every dog born with prized colors, many more appear with defects, also the product of recessive genes.