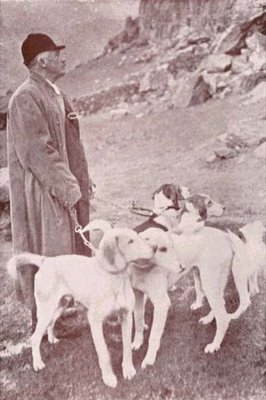 Joe Bowman, the Ullswater Huntsman, from Foxes, Foxhounds & Foxhunting by Richard Clapham, published in 1923.
Most of the folks that write books on dogs would like their breeds to be ancient and have romantic and mysterious origins. Pick up any book on Jack Russell Terriers, for example, and Trump will be presented as the first white foxing terrier on earth -- never mind that the young John Russell selected it for looks alone and had no problem finding another white foxing terrier to mate with it.
The Border Terrier folks have wrapped the story of their dog completely around the axle in an attempt to give it an ancient origin. In fact this breed was created at about the same time as the Kennel Club was created, and it was pulled on to the Kennel Club roles as quickly as could be.
As for the Patterdale Terrier, quite a few people claim one person or another created the dog, and yet all seem quite confused as to the shape of the head. Where did that come from?
In fact it is no mystery, and the true story of the Patterdale is not too deeply buried or very old.
In 1873, the Patterdale and Matterdale hunts were combined to form the Ullswater Foxhounds. In 1879 Joe Bowman (just 22 years old) was made master of the Ullswater, a position he held (with a few short interruptions) until 1924, when he was replaced by Joe Wear who held the position for then next 47 years. Joe Bowman died in 1940 -- one of the most famous huntsmen of all time (there is even a song about him).
Joe Bowman was an early Border Terrier breeder, and he was also the first person to cross up a blue-black Border Terrier with a black and tan Fell Terrier (also called a working Lakeland) to create what he called a Patterdale Terrier.
In Jocelyn Lucas' book, Hunt and Working Terriers, a table at the back notes that the United Hunt preferred a "Lakeland, Patterdale, from J. Boroman's strain (Ullswater kennels)."
In fact, "J. Boroman" is a typo, and the real man was Joe Bowman.

From Appendix II of Jocelyn Lucas' Hunt and Working Terriers (1931).
Lucas published his book in 1931, and the information in it was collected between 1925 and 1930. The Patterdale Terrier was clearly a type (if not a widely used type) by the 1920s, and it centered on the Ullswater Hunt and Joe Bowman.
With that knowledge, it was not too difficult a thing (but not too easy either!) to lay a hand on Foxes, Foxhounds & Foxhuning by Richard Clapham, published in 1923. Here we find not only a good picture of Joe Bowman (see top), but the picture reproduced below with caption. Click on the picture for a larger image. 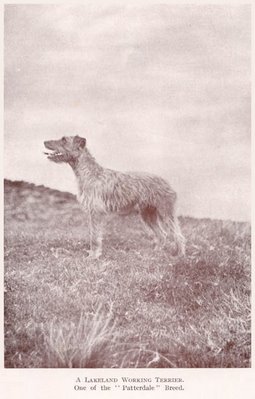 "One of the 'Patterdale' breed." Click on the picture for a larger version.

Now we can see that the Patterdale name goes back to at least the Nineteen-teens, a period just before the Border Terrier (which, like the Patterdale, started out as little more than what we would call today a Fell terrier today) was pulled into the show ring. To see what Border Terriers looked like in 1915, click here.

At about the time that Joe Bowman was fading out of the dog breeding business, in the 1930s, a young Cyril Breay was stepping up. Breay, like Bowman, had been a Border Terrier breeder.

In the early 1930s Breay met Frank Buck, when Buck rescued one of Breay's dogs that had gotten stuck in a deep rock cleft and Buck -- an expert at dynamite -- had blasted it free.

Bucks own line of dogs at the time were descended from Ullswater terriers kept by Joe Bowman, and Breay and Buck soon became fast friends with Breay breeding black dogs from Frank Buck into his line, and Buck crossing tight Border Terrier coats into his. Over time, the dogs of the two men devolved to a type as lines were crossed and condensed.

Cyril Breay was always adamant that the Patterdale Terrier was not made by crossing in Bull Terrier, and he was not lying. The Patterdale head is no mystery to a border terrier owner - the same broad cranial outlines are evident in both breeds.

Brian Nuttall began breeding Patterdales in the late 1950s, and says that his dogs are very much like those his father kept in the 1930s. It would not surprise me a bit to find that Nuttal's father got his dogs from Bowman, or from intervening hands that had gotten their dogs from Bowman. What is clear is that the Patterdale Terrier was already a recognized type by the time Nuttall's father owned his dogs.

The fact that Joe Bowman started the Patterdale strain and named it takes nothing away from folks like Cyril Breay, Frank Buck and Brian Nuttall, all of whom did quite a lot to popularize the breed, maintain it as a working dog, and perhaps improve and stabilize its looks. It is an easy thing to name a new breed (it's done every day by puppy peddlers), but quite another to find a market and a following for the dogs based on their performance in the field.

I mention all of this (I have told the story before and it is in the book), because I found a rather interesting old obituary on the internet the other day. Note the byline. With some amusement I note that "Greystoke Castle" was (supposedly) the ancestral home of Tarzan:

September 1956 PATTERDALE - One of Ullswaterside’s oldest residents, Mrs. Esther Pattinson, Broadhow, Patterdale, died at the age of 85. Formerly Miss Bowman, Matterdale, she hailed from a noted hunting family — her uncle was the celebrated Joe Bowman, huntsman of the Ullswater foxhounds for 42 years, while her great-grandfather, Joe Dawson, was for many years huntsman of the one-time Matterdale foxhounds. Mrs. Pattinson was only 13 years of age when she was hired as a farm girl, later working at Lyulph’s Tower for Mr. James Wood, who was agent for Lady Mabel Howard, Greystoke Castle.

Hello: My great-grandfather was Joe "Hunty" Bowman from Patterdale. I would love to chat with anyone who knows more about him. hdixon@wi.rr.com

maybe you should contact the British national Working Terrier Federation. You can e-mail them from their site which is www.terrierwork.com
I am hopeful that this will assist

Joe Bowman is my 1st cousin 4X removed. I have researched our shared ancestral line back to 1555 in and around Ullswater, mainly Matterdale. We are descended from the Grisdales who in turn are descended from Viking stock who settled in the area around Grisdale (Norse for valley of the pigs (wild boar)) now known as Mungrisdale.