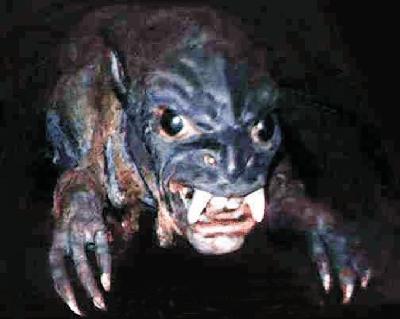 This is a picture of a fake Chupacabra. The dogs caught a REAL one!

The photo, above, is a not-very-good model of a Chupacabra. We sometimes hear of El Chupacabra, but it's very rare to know anyone who has actually seen one in the field, much less been lucky enough to bag one. But that is what the dogs and I did back in 2006, and I have the pictures to prove it.

But I am getting ahead of myself. What, you may ask, is a Chupacabra?

El Chupacabra is an animal that is known to inhabit rural areas of Mexico and parts of Central America. Its name, translated literally from the Portuguese and the Spanish, means "goat-sucker" for its habit of attacking and killing lifestock and draining them of all their blood.

It is not clear when the Mexican Chupacabra first came north to the United States, but by the mid 1990s, it was here. Mexican farmhands in such diverse places as Kentucky, Oklahoma, and Tennessee, would periodically come across dead livestock in the fields with torn windpipes and every ounce of blood drained from their carcases. "El Chupacabra," the migrant workers would whisper. "It has come El Norte with us."

It is easy to write such things off, and, in truth I have always done so myself. Where are the pictures of El Chupacabra? Where does it live during the day? Why does it only come out at night? Where is the proof? There were never any answers. Until now.

On that Sunday, I was walking the edges of a cut-over corn field with the dogs in tow, when Mountain slid into a hole and opened up to a full bay. A few minutes later, this thing came barreling out of the ground.

Mountain followed it out of the hole and gave chase, and soon caught it by the rear leg. Pearl, still young and full of herself, piled into the scrap too. Both dogs had it above ground and on its back. I ran over and put my boot on the creature so it could not bite the dogs. But ... what the hell was it?

And then, I knew. It was El Chupacabra -- the infamous Mexican goat-sucking blood beast of legend.

By God I had one, and it was not going to get away. And it didn't.

Now there are some who may doubt my story, but I have appended pictures of the Chupacabra below, for anyone to see the horror of this thing.

Clearly, this is not an animal found on earth. This animal is the work of the Devil. This is El Chupacabra. 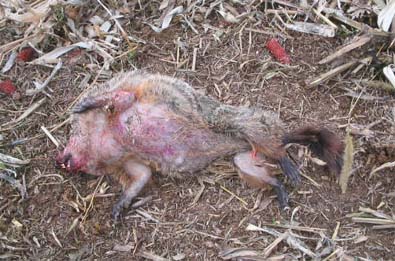 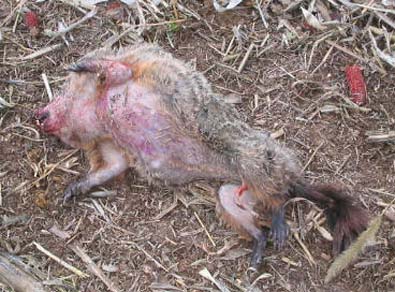 Didn't you post a mangy woodchuck photo once before?

OK, so you have a low resolution photo from poor angle of an apparently dead, mange-ridden creature. You got nothing. When Chupacabra builds organizations of followers, a festival in its honor, becomes a school mascot, and gets grainy videos of it in the wild, then you will have something to talk about. Has Chupy become a tourist attraction like Bigfoot? Nope. Sasquatch is the man.

Reverend Elkanah Walker, a protestant missionary, in 1840 wrote of giant bipeds around Spokane, WA who stole salmon from Indian fish nets. In Canada, the famous cartographer and explorer David Thompson, circa 1810, recorded him and his men seeing massive footprints (that rattled the expediton for days) of an eerie two footed animal. When you smell its stench on a remote mountain trail, and have hair stand-up on the back of your neck, then you got a story. Based on the number of sightings, the Sasquatch breeding population has to be enormous. Sasquatch is so clever that he eludes the camera of all but the most savvy outdoorsman.

Chupacabra, scheeeshh! Mr. goat-sucker needs a PR man to run with the likes of Sasquatch. He may make the grade, but it will take some polishing and a couple hundred years. -- TEC

Chas -- Might be this one or another. I've also posed the occasional mangy fox, malocclusion groundhog, and the like. This is a repost from several years back -- like a good commie pinko liberal, I recycle, reuse, and repair. This one gets special points for the weird purple color from the poke berries.