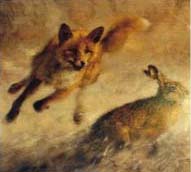 Aug. 4, 2006 — Australia's island state of Tasmania risks losing its status as a "Noah's Ark" for rare species with the discovery that foxes have probably begun breeding there, environmentalists have warned.

The leader of the Australian Greens party, Senator Bob Brown, said the discovery of a fox carcass on a road in the pristine state Tuesday signaled an environmental emergency.

Tasmania was believed to be fox-free until a government-funded report confirmed their presence in June.

Scientists believe the age and location of the carcass indicate that the fox was likely born on the island, wildlife biologist Nick Mooney told national radio.

Foxes have been blamed for devastating native species on the Australian mainland, in some cases leading to extinction.

"It is a national environmental emergency. Tasmania is a virtual Noah's Ark of rare and endangered species, many of which are extinct or nearing extinction on mainland Australia," Brown said.

"These include the bettong, barred bandicoot, eastern quoll and ground parrot.

"There should also be no stone left unturned finding and imprisoning the criminals who are responsible for foxes being brought into Tasmania."

A population explosion of species introduced to Australia since European settlement began more than 200 years ago is a growing threat to agriculture and native wildlife.

Some of the animals were introduced as beasts of burden and others as food sources, while foxes were brought in for recreational hunting.

Federal Conservation Minister Eric Abetz called on the Tasmanian government to increase funding for its efforts to keep the island free of foxes.

"If foxes become established in Tasmania as they are on mainland Australia, it is estimated the damage to our natural ecosystems and to our agricultural production would be in excess of 100 million dollars ($75 million US)," he said.