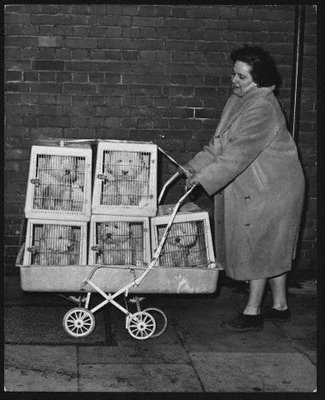 This piece is recycled from an from April 4, 2004 post to this Blog

A book some might find of interest is "The Animal Estate: The English and Other Creatures in the Victorian Age" by Harriet Ritvo [Harvard University Press, 1989]

Ritvo points out that the Dog Show crowd and the Animal Rights crowd spring from the same root-stock of sentiment, and in both cases the animals are the side-show, not the main event.

Ritvo writes that in the Victorian era and into the 20th Century dog show folks "elevated standards that had no basis in nature or aesthetics but reflected the ignorant, self-interested caprices of fanciers who wished to boost the prestige of their own stock in order to associate themselves with people of good breeding." And, of course, it paid, with show winners being sold for cash -- a quick way for people of low rank to buy themselves up the social ladder. If one had a dog that was "best of breed," then surely the owner must be of similar worth, right??

Ritvo notes that terriers were particularly singled out for attention by the show ring preeners and pretenders, and that "'The Fox Terrier Chronicle, the only 19th Century periodical devoted to a single breed of dogs, covered the terrier elite the way that newspapers and other periodicals covered human high society."

Ritvo notes that dog fanciers projected "an obsessively detailed vision of a stratified order, which sorted animals and, by implication, people into snug and appropriate niches" with dog shows offering "a dizzying range of classes and then abstracted from them a carefully calibrated hierarchy of animals, ranging from those who did not place even in their sub-breed category to the best in show."

In short, the attraction of dog shows was that people, who themselves were as common as a turnip top. could now fancy that they were among the social elite. They did not have to have real knowledge of animals, or have an important job or title or large estate -- they just had to purchase a dog from a "reputable" show breeder and put on airs.

As one Victorian periodical noted, "nobody now who is anybody can afford to be followed about by a mongrel dog."

Ritvo notes that "Specialist clubs were supposed to defend their breeds against the vicissitudes of fashion, but they had few other guides in their attempts to establish standards for breeds and judges."

Even in the Victorian era, almost no one walking into the ring with a "working" breed actually worked their dogs. After almost half a century of formal shows, the author of a manual for dog owners noted that "the sportsman will as a rule have nothing to do with the fancier's production."

All of the above is from the Second chapter of Ritvo's book. The Third chapter is about the rise of the Animal Rights movement, and here we see the same class issues popping up that we did in the previous chapter. Just as honest working dogs were labeled "mongrels best for the dustbin," so too were the people that owned them. The analogies made were simple and direct: Coarse people had coarse dogs and engaged in coarse behavior. Show people had "pedigree" dogs and they did not engage in coarse behavior.

Of course, not everything was quite as simple as this in the real world. No matter -- the goal of the RSPCA was not entirely about animals anyway -- it was in no small part all about putting down the poor and the rural and castigating them for having "undisciplined" values.

Towards this end, Ritvo notes that the tracts of the RSPCA "implicitly identified the lower classes as the source of brutality," even as this same organization gave "the big wink" to fox hunting and grouse hunting which were common pastimes of the rich and landed.

Today, of course, the people you see at a PETA rally and the folks that you see trotting their dogs around a show ring are not all that different demographically.

In his book "In Defense of Hunting," James A. Swan notes that the Animal Rights crowd is dominated by people that are "white, urban, predominantly female, nicely dressed" and that many of them are "people who have gone through painful divorces or have had traumatic childhoods or have otherwise been hurt by the norms of society."