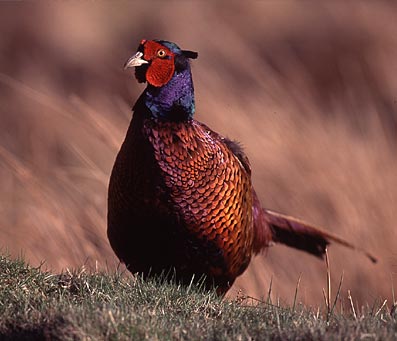 A new report from the Game Conservancy Trust (a very good conservation group in the UK) notes that the release of up to 35 million pen-raised pheasants and 10 million partridges a year in that country can have a "negative impact" on some vegetation. Their recommendation: release "no more than 400 pheasants ... per acre of woodland."

Ugh .... right. More than 400 pheasants per acre would be wrong. I have always thought so.

It turns out some estates release as many as 1,000 pheasants per acre. Yow! Can this be true? We don't have densities like that at the average chicken farm.

Of course, here in the U.S. we generally do not hunt pen-raised birds. Most serious bird hunters sneer at canned hunts. You find a little bit of this kind of thing going on in Texas and near some East Coast cities, but most of our shooters are going into real nature and are content with smaller bags.

What's the purpose of shooting 200 or even 40 pheasants in a day?

In the Dakota's, a man and his dog will work large open fields all day long for a bag of three. That's real hunting.

In my mind, a bunch of over-dressed men and women walking a line to shoot pen-raised birds is a chicken shoot. There is no field craft, and there is no chance you will go home empty-handed. It's not hunting, because it does not entail skill or chance or expertise of any kind.

We do not say a butcher has gone hunting, and yet we say a person has gone hunting even if he or she has spent three days in the woods and shot nothing. Hunting is not a chicken shoot and it is not entirely about killing, is it?

Each to his own, of course. We kill a billion chickens a year in this country and I am not wringing my hands over that, so I am not going to rip out my own beating heart to protest canned pheasant, quail and partridge shoots in a country where I do not even live.

I am just glad to be an American. I am glad we (mostly) do it differently.
.

It is not hunting.

Pheasants, grouse, and partridges are raised this way, and I'm entirely okay with it.

It's not hunting, and nobody pretends that it is.

The purpose of it is not to kill wild birds, but shoot some birds and work the dogs. This is clay-pigeon shoot with live targets. George V was a devotee of bird shooting. He shot over 1,000 pheasants in one day, which is the record in Britain.

I am entirely okay with it. At least they aren't doing it to native species, which can't propagated or managed at such high numbers. The common or ring-necked pheasant isn't native to Britain or any part of North America. The only part of Europe in which they can be found as native birds is in the Caucasus.

Without these things, you'd not have the ritual and traditon that created a division of labor among British gun dogs. Britain would have HPR's.

It's a lot better than what happened here. When the settlers came they did that same sort of shooting of native birds, which were unable to put up with it at all.

The fact that is done over here is a positive, because it gives bird dog handlers a chance to work their dogs in the off-season. And that to me is far more important.

Phezes are foreign. They are bred for their flying ability, and they don't tame down very easily in captivity, unlike New World Quail.

If I had one wish as far as hunting goes where I live, it would be that our government would get some guidance in regulating our hunting industry from The US based on what you have achieved over the last 50 years. Despite the crazy weather of late, you are right to be glad that you are an American in this respect and also in quite a few other ways as well.
Jonathan CT

'here is no chance you will go home empty-handed'

According to my research it's actually funnier/sadder than that. Even after paying as much as £35 per bird ($54.94) they don't get to take them home!

At least they don't call it hunting.
SBW

Ask the guys in Mobridge SD who host his party every year. There are so many layers of irony to that story that it would defy even the best writers at 'The Onion'.

And then I thought back to my childhood of searching for snakes on a decent-sized plot in the country. That place was three acres.