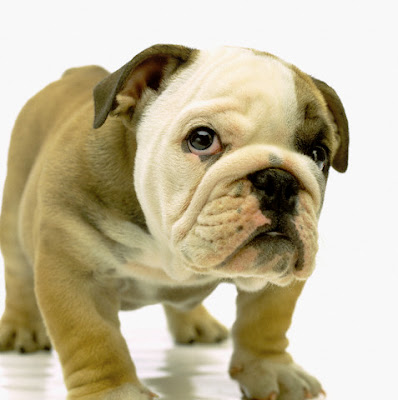 Oh good! Well, what did I expect? The tragedy that is the AKC continues unabated.

I think I described this breed quite well in an earlier post in which I noted that:

"The famed English Bull Dog ... is mostly Chinese pug -- a show ring creation with legs so deformed it can barely walk, a jaw so undershot it cannot grab a frisbee, and with a face so bracycephalic it cannot breathe. Add to these problems a deformed intestinal system (a by-product of achondroplasia or dwarfism) which makes the dog constantly fart, and a pig tail prone to infection, and you have a dog that considers its own death a blessed relief."

Of course, I am not the first to note that the English Bulldog is an abomination and embarrassment.

As early as 1894, Englishman Rawdon Lee, an authority on bulldogs, stated:

"It is known that time plays grim jokes on historical monuments. There has probably never been a dirtier joke, however, than the one played on our national symbol, the English Bulldog.... The lunacy of breeding for extreme exaggeration, for extreme foreheads and huge skulls, for totally exaggerated low-slung front legs, for shoulders pointing outwards at almost a right angle, for Bulldogs with a front wider than that of the opposing bull. None of this used to be the case and only recently came into fashion."

Not said by the American Kennel Club: that the English bulldog is now such a mutant mess that it needs to be put into a rape rack in order to mate, and it has to have a veterinarian standing by when it is whelped, as almost all the dogs are Cesarean section due to the small pelvis of the dam and the enormous heads on the pups.

Also not said by the American Kennel Club: that the bulldog is now such a health wreck that the U.K. Kennel Club has moved to change the breed's standard so that the dog has some chance of becoming a being able to actually walk and breathe.

My thoughts when I read the AKC item yesterday were along the lines of "Hoo boy, and people think Bulldogs are a mess now, wait until the millers ramp it up".

They are a veterinarian's dream, poor things. Can't even whelp their pups in most cases. There's a message there, if anybody would pay attention.

To show how far the AKC has fallen, if you check the Minneapolis entry, the writer gushes over the fact that they have two 'hunting dogs' on their top ten list. I guess people at the AKC don't realize that Labradors, Goldens, Beagles and Dachshunds are hunting dogs too - or they are supposed to be, so almost every list has four right off the mark.

The millers are already producing English and French bulldogs. But notsomuch here. In Russia. They export them as tiny (the ones I've seen were clearly underage) pups. They are sold by US brokers via newspaper ads and over the internet, with cash-only transactions taking place in parking lots. The going price for a bulldog pup in the US is so high, and the cost of raising them in Russia so relatively low, that this is a profitable practice.

Frankly, I don't see how milling will harm this breed. (Harm individual animals, yes, of course.) A miller, with profit as the guiding principle of each breeding, will select for hardy dogs that can mate, whelp, and breathe normally. Much cheaper to breed dogs naturally. Since it's hardly possible for the incidence of other genetic defects (such as hip dysplasia) to go any higher in this gene pool, some puppymill selection for vigor might go a long way towards moderating the morphological extremes and improving overall health.

Puppymill selection can't hurt this breed nearly as much as show-fancier whimsy has done.

Heather makes a very good point. The puppymillers will probably avoid using dogs that aren't free-whelpers because c-sections cut into their profits too much.

That's why so many of the toy breeds from puppy mills end up being oversized (according to their standards) -- they use large brood bitches to avoid c-sections as well as to maximize their litter sizes, so their sizes start creeping up.

In the United States tried something similar the Mr David Leavitt of Pennsylvania, and through various passages between Bullmastiff, British Bulldog and American Bulldogs

With this dog, has recreated the image of the old type of English Bulldog, eliminating the shortcomings of race, including the difficulty of breathing

The mortality of pups from Eastern Europe and very high! Due to transport (without food and water) and early weaning.

Not recommended the purchase

The Leavitt bulldog is a dog dealer's dog -- a dog bred to sell to people in the pet market. The dog does no job other than lie in the driveway or cruise the kitchen for table scraps. There is nothing wrong with having healthy bull-breed dogs for pets (I am all for that!), but America is DROWNING in perfectly healthy pit bulls that are going to the gas chambers by the TON on a daily basis. Do we really need more dog dealer dogs, and especially more bull-bred dog dealers dogs? I don't think so.

But it's still a free country, and there is no stopping people, is there? Count me as one person who is not enthusiastic, however.

immediately the handcuffs and throw away the key!


While too! most people do not watch dogs, but the piece of paper written with
pedigree.

The Dog in the closet and the piece of paper hung in the living room in beautiful sight!

Is pulled out only for the expo!Not only fault of breeder but also people who buy dogs for fashion! And Provet sperm for resale !