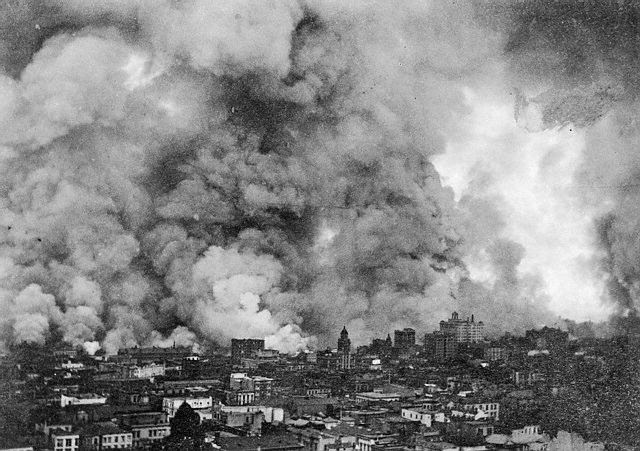 Fire and smoke from the 1906 San Franicisco Earthquake.

One hundred and two years ago today, the great San Francisco Earthquake struck. Up in the hills surrounding San Francisco, it was not clear how badly the City had been hit, but it soon became evident when hill residents found packs of dogs running up from the shattered City:

It was the dogs, wild with fear, couriers of the cataclysm, that gave me the first measure of our calamity... They had come far, for they ran slowly. Their jaws were dripping. They moaned and whined. All of them panted steadily up the steep hill. Then and thus I knew that, bad as it had been with us, on the hills the darker chapters of the story of woe were to be read on the lowlands and in the valleys. We were shaken but safe; below us were nameless horrors, the dogs knew, and knowing, ran to the high places.

The earthquake struck at just past five in the morning, and many buildings fell, but not all. The brick structure of The St. Francis Hotel, for example, initially remained sound.

Chef Victor Hirtzler and his staff swept out the kitchen and served breakfast in the café to tenor Enrico Caruso and other members of the Metropolitan Opera Company who, still in their pajamas, had fled to the Saint Francis after their own hotel began to crumble.

The young actor John Barrymore came in to the hotel just as the Earthquake struck and, stone drunk, seemed not to notice that the ground was violently shaking. He went upstairs to his room and went back to sleep until secondary alarms announced that fires were begining to race through the City.

San Francisco was burning. Most of the city was wood, and even when outside walls were made of brick, the tar roofs of the day burned, exposing wooden rafters and joists to licking flames.

The heat was so intense, it melted glass. Thick greasy smoke billowed miles into the air, choking residents who had little recourse except to let the city burn.

And burn it did, for three days, until at last there was nothing more for the flames to consume.

Dazed residents wandered the streets on the fourth day, stunned that they were alive and devastated by their loses.

Five days after the earthquake struck, work men looking for bodies in the rubble of the Saint Francis Hotel found the wine steward's fox terrier alive in the hotel basement. The dog was christened "Francis," and he came to be a symbol of the the City's endurance.

Just 19 months after the great San Francisco Earthquake and fire, the St. Francis Hotel reopened - proof to the world that City would triumph over adversity.

Today the Saint Francis Hotel still stands, and a children's book has been written about the little dog found in its basement. 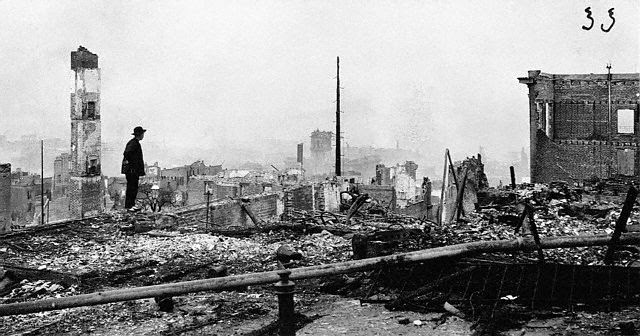 The rubble of San Francisco's Chinatown after the 1906 Earthquake.
.

Wow. I sure love that hotel. There is a small exhibit of photographs of the place taken by Ansel Adams (!) in the lobby that is really remarkable.