A 122-pound male cougar was shot in a bustling, trendy North Side Chicago neighborhood on Monday night. Where did the animal come from? Biologists say they suspect DNA tests 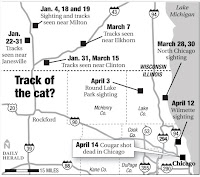 will show it is the same one spotted numerous times in Wisconsin making its way toward Illinois over the past three months (click on map at right for sighting notes and calendar), and that he is a wild cougar that came from the Black Hills of South Dakota, meaning this is an animal that traveled more than 1,000 miles.

Young male predators typically move out on long migrations in search of new territories and mates, and it's been known for a long time that cougars are coming East.

The Midwest and East were part of the original home range of the cougar, and we certainly have enough wild game and wild lands to support a returning population. And Mother Nature, bless her heart, does abhor a vacuum.

Since 1990, about 40 cougar sightings have been confirmed, mostly in Iowa, Minnesota and Missouri, but there are rumors and some small sign that a few animals may already be in Maine, New York, Massachusetts, Pennsylvania, Virginia and West Virginia. No conclusive evidence yet, and it may only be leaping at shadows (probably is), but there is no doubt that cougar are coming East. On that point, we can be sure.

Email ThisBlogThis!Share to TwitterShare to FacebookShare to Pinterest
Labels: cougar