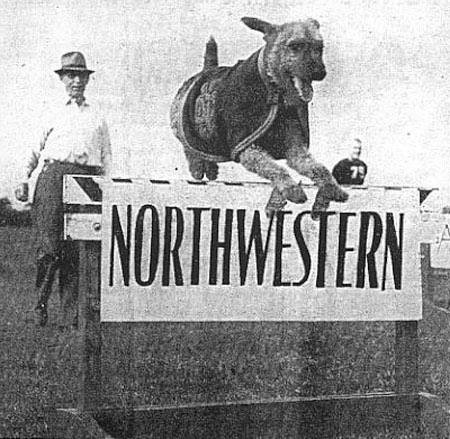 The original Notre Dame mascot was an Irish terrier. A series of dogs played the role, the first being a dog named "Tipperary Terrence" who was presented to Notre Dame head coach Knute Rockne in 1924. This dog was replaced by "Brick Top Shuan-Rhu" another Irish terrier, in 1930.

In 1933, Brick Top was replaced by a dog named "Clashmore Mike" who proved so popular and beloved that all successor dogs were given the same name.

Clashmore Mike was a splendid mascot as he could be used to great effect if made to do a series of simple tricks. At half time, for example, the handler would run Clashmore Mike around the stadium, and as he made his rounds he would stop and lift his leg on the opposing team's bench to howls of delight from the fans.

For the famous Navy-Notre Dame game, Clashmore Mike's handlers would announce that they had been feeding the dog goat meat all week long. In addition, the dog was trained to chase and attack any goat he came across, so that when the Navy goat-mascot came on to the field leading the Navy team, Clashmore Mike took after him at top speed, again to great howls of laughter and the embarrassment of Navy football fans.

Clashmore Mike was replaced as the school's mascot in 1965, when the Leprechaun became Notre Dame's official mascot. It was a great step down, in my opinion -- from reality to fantasy, and from a dog with character to a mere cartoon. 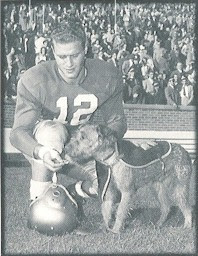 Can't believe I was led to read anything about ND... (great article last Fall on Slate: Cherlie Weis- Worst Football Coach in the Universe.