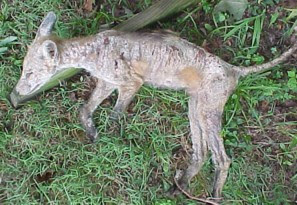 Sarcoptic mange is a common fox disease caused by a parasitic mite called Sarcoptes scabiei, which burrows into the skin, with infestations of several thousand mites per square inch possible.

Scabies mites secrete a yellowish waste that hardens into a thick crust on the skin, causing hair loss and (as infestations progress) lacerations and cracking of the skin. Chronic itching can cause the fox to bite and gnaw at itself, and the animal can become dazed from pain and lack of sleep. Weight loss from stress can be quite rapid, and organ failure is common. Death usually follows within six months of infestation.

One of the chief causes of mange in wild fox populations is too high a fox density. Mange mites can survive a long period of time in a den, which means that effective mange control requires fox dens to be unoccupied at least one year out of every two.

In areas where fox trapping and hunting is outlawed or discouraged, however, fox population densities will often rise to the point that some dens never lie fallow. In such situations mange mites colonize the den and parasitize generation after generation of foxes who die horrible and grisy deaths.

Death by mange is a long and nasty torture, and far more cruel than the swift death offered by a hunter's bullet or the swift chop of a working lurcher or hound.

Anyone who truely cares about animal welfare should favor a return to managed population control of animal species that have overshot their carrying capacity. Death is not an option -- all animals die. The only real question is how an animal will die and under what circumstances. Managing wildlife through regulated hunting is a far more humane alternative that death through disease, starvation and vehicle impact.
.

Do you think that is the fox you'd photographed earlier with the balding tail?

No, this is a red fox shot by a friend of mine north of Baltimore a few years back -- the animal countrol folks called him to do the job, as he has forgotten more about fox than they will ever know. My skin-tail fox is still running around in the front yard at night -- I will set up the camera and see if I can get a shot of him. He may shake it off -- mange is sometimes beaten naturally.

There was a fox with really bad mange in my neighborhood a year or so ago. I would often see it wandering around people's trash bins when I walked my dog in the morning. Poor thing!

How often do racoons get mange? Pepper found a racoon at the community garden that looked horrible a couple of months ago -- I called the police to dispatch it (they don't let me have guns at the housing project -- too much encouragement for the drug dealers! ;-)) since it was noon and I suspected rabies.

The cop told said that if it didn't have rabies, he thought it at least had mange and should be put out of its misery, which he did.

Unfortunately, they left it to ME to clean up afterwards. I had to put Pepper on tie-out and triple-bag the thing for the trash as burying it wasn't an option as Pepper really, really thought that since she had found it, it should be hers.

Fun in the outdoors! :-P

Hi,
I work for a company called Windfall Films and we are making a documentary about urban foxes. We are covering issues such as mange. I was wondering if you have a high resolution copy of this photograph of the dead mangy fox which you would be willing to let us use in our programme or on our website?

Thanks for your time,