Last Dig of the Year 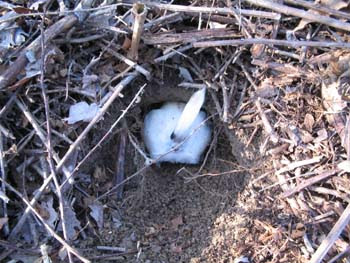 Mountain and I went out yesterday, the last day of the year.

As I was alone and scouting, I left the dog in the car for the first two farms, locating new holes in new hedgerows at an old farm, and stopping by a new farm to get permission for the Spring.

That done, Mountain and I walked another large farm and checked out a few large settes but no one was home -- not surprising considering it was 55 degrees out.

At the far end of the farm, just above a creek, Mountain found in a very tight groundhog hole under a stack of mutliflora rose. It looked to be a shallow dig, and though all I had with me was a shovel, we went at it.

Mountain got past the curve in the pipe at about the same time I popped into the den, and within a few seconds the dog was throwing out old bedding and leaves.

I was pretty sure it was a possum, but a cat-like squall came from the hole and then the unmistakable smell of skunk.

Mountain was out of the hole very quickly thanks to an assist from me. The skunk tried to bolt, but I said something to it and, as a consequence, it dove back into the pipe.

Mountain got a pretty light dose, and I buried the skunk. He'll dig himself out, of course, but hopefully he'll have as miserable a time doing that as we will cleaning up from this chemical attack.

I stopped at a pet store on the way home and picked up two bottles of "Nature's Miracle Skunk Odor Remover" which is a different product from "Skunk-Off". With this new stuff you simply put it on the dog and let it dry -- the enzymes are supposed to break down the stink. Aside from the enzymes, most of the rest of the product is alcohol.

We'll see if it works. It it does, it really will be a Miracle. My experience is that it takes about a month for a dog to fully rid itself of skunk smell. 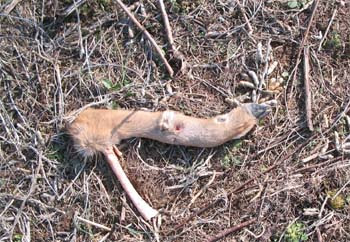 This deer leg was so fresh rigor mortis had not yet set in, and the bit of blood in the hole in the leg was not yet clotted. There were no deer carcas nearby, so my guess is that a fox dropped it and scurreid off as I came into the field. Deer hunters were everywhere today so this leg was probably scrapped from a gut pile on a neighboring farm. 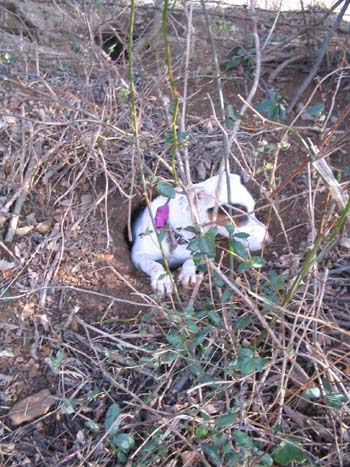 Mountain exits a hole earlier in the day -- no one home.