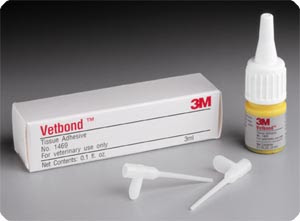 A few days ago my son was messing with the dogs, food was involved, and also a small enclosed space. The end result was that one dog savage another's ear, ripping it in half length-wise.

Thanks to the miracle of phones my son managed to reach me at work and I returned home to examine the situation. The rip was more than 2 inches long -- most of the length of the ear.

Instead of running off to the vet, I opened up my little medical box, cleaned the wound with running water and got the edges flowing again. Then I applied just enough soft pressure to the ear to begin the clotting, pushed the ear edges together and welded them fast with Crazy Glue.

I will have to reapply the glue in about four days, but after that it should be sufficiently knitted together to stay healed on its own.

Compared with a traditional suture, the SuperGlue of Crazy Glue has several advantages. On average, it takes only one-tenth of the time to close an incision with glue than with sutures. The bonding strength of the glue is equal to a 5-0 monofilament suture. It also has an anti-microbial effect that can decrease infection rates in contaminated wounds. The cosmetic appearance of the healed incision is also better with glue than with a suture. And, of course, if you do it yourself it is quie a lot cheaper. Every dog catalogue sells VetBond, which is just a patentable version of Crazy Glue with an Ethyl substitued for the Methly. Crazy Glue is a good thing to have in your kit for ripped ears, paw lacerations, and the like, and it's been used by midwives, medical techs in wars, and construction workers for decades.