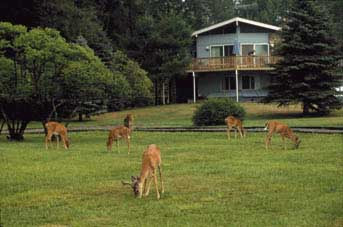 MILLERTON, N.Y. -- The deer rose out of a distant swamp before dawn to browse in a hay field on a recent day. Then, as the sun came up, they made their way into a hillside forest, looking for concealment.

But the forest offered few hiding places. It has lots of tall, mature conifers and hardwoods, some 100 years old. Under them, virtually nothing grows -- no seedlings, no saplings, no bushes, and only a few ferns. The floor of this forest, like others around the country, has been stripped clean by whitetail deer.

It's deer-hunting season across the land -- a time when Americans are reminded that bountiful whitetails have their costs. The Insurance Institute for Highway Safety said earlier this month that animal-vehicle crashes, mostly involving deer, killed more than 200 people last year and caused an estimated $1 billion-plus in property damage. The U.S. Department of Agriculture says deer cause more than $400 million in yearly crop damage, not including home gardens and ornamental shrubbery. But below the radar of most people, whitetails have been eating their way toward a more lasting legacy: They are wreaking ecological havoc in forests across the nation. They have become de facto forest managers, determining today what many forests will look like 100 years from now, say forest experts.

"Deer have stopped the regeneration of our forests in many areas," says Peter Pinchot, a Yale-educated director of the 1,400-acre Milford Experimental Forest on the Poconos Plateau in Pennsylvania. That means little trees aren't growing up to eventually replace big trees.

Deer also love hickory and white ash, and eschew black birch, American beech and black locust. If they get hungry enough, they'll eat almost anything, and their victims aren't just trees. The ground-level vegetation of the forest "has been severely degraded by over-browsing in many regions, eradicating critical habitat for many plants and birds," Mr. Pinchot says.

Gary Alt, Pennsylvania's chief deer biologist, says that allowing deer to multiply beyond the point where forests can replenish themselves, "has been the biggest mistake in the history of wildlife management." He calls it "malpractice."

Ironically, it was Mr. Pinchot's grandfather, Gifford Pinchot, who helped bring back whitetail deer a century ago. As the first director of the U.S. Forest Service, he helped pioneer a conservation movement to save forests and restore species of birds and animals all but wiped out by commercial hunters.
When he took over the job in 1898, the whitetail population was no more than 500,000 nationwide. Pennsylvania had fewer than 600 deer. Restocking began in 1906 with deer brought in by rail from Wisconsin, Michigan and West Virginia.
With hunting restrictions, the herd grew back quickly. By 1917, Pennsylvania was the too-many-deer poster boy. Hunters loved it. Foresters hated it. Today, Pennsylvania has an estimated 1.6 million whitetails.
"If Gifford Pinchot could see what deer have done to our forests, he'd roll over in his grave," says Bryon P. Shissler, a wildlife biologist in Pennsylvania who consults on deer issues.

That's way too many deer to allow forests to regain their health and diversity, says Peter Pinchot. "You walk through the woods of central Wisconsin, where I live, look at the understory and there's nothing there," says Robert Wegner, a historian who has written a dozen books on deer and deer-hunting. Not only is the deer population out of control, the management model of control "is
broken," he says.

Animal-rights groups such as the Washington, D.C.-based Fund for Animals applaud hunting's decline. That group wants hunting outlawed, and advocates non-lethal methods, such as birth control, to decrease deer overpopulations. But birth control, so far, doesn't really work, say most wildlife managers. A general rule of thumb among deer biologists is that hunters need to kill 35% to 45% of the females annually to stabilize the population. But in most places, they aren't killing even half that percentage, according to state tallies.

Who's to blame for the whitetail population boom? Hunters, mainly. But, increasingly, non-hunters and anti-hunters are sharing the blame. For decades, says Mr. Alt, the Pennsylvania biologist, vocal hunters have pressured state wildlife managers to maximize deer populations. Many still do. State wildlife agencies, which collect income from the sale of hunting licenses, obliged by restricting hunting-season lengths and the number of deer a hunter could kill.
By the 1930s, most states had adopted rules banning the killing of does. Bucks are serial breeders, so more females mean more fawns and a bigger herd. These so-called buck laws became a part of the deer-hunter creed. Now states are pushing doe killing to create smaller, healthier herds, but many older hunters are loath to kill females.

When Pennsylvania put more than a million doe-killing permits up for sale this year, one group of hunters, the Unified Sportsmen of Pennsylvania, launched a "Stop the Slaughter" boycott. Doe killing, they argue, is causing deer shortages -- a notion the state disputes. In recent years, states have lengthened hunting seasons, increased the number of deer each hunter can kill and made it easier to get "nuisance" permits, which allow farmers to kill deer causing damage anytime. Southern South Carolina's lengthened season, for example, opens on Aug. 15 and closes Jan. 1. Hunters can kill as many bucks as they want, and doe permits are easy to get. Still, by most accounts, the state's whitetail population is growing. Several states make hunters "earn a buck" -- meaning they have to kill a doe before they are able to kill a buck. And they can essentially buy as many deer-killing permits as they want.

But most hunters hunt for meat, says Mr. Wegner, and once the freezer's full, their incentive wanes. Selling wild game is illegal. Programs in which hunters donate deer to food pantries for the needy have expanded, but not enough, he says. Many of those who live in the forested sprawl tend to be
relative newcomers to the countryside, second or third-generation suburbanites who now own hobby farms, weekend homes, or houses in developments in once-rural areas. Some believe hunting is unsafe or inhumane, and post "No Hunting" signs on their property or push local governments to adopt anti-hunting regulations. This turns large patches of the landscape into deer sanctuaries.

Deer love exurbs, where forest meets garden, with no predators and delicious ornamental shrubbery. "They know where the safety zone is," says Mr. Pinchot. Some studies show that in deep forest, coyotes and bears kill half the fawns, he says. But man has long been the deer's chief predator.

With exurban sprawl, a big threat now is likely to be the family SUV. Depending on the landscape, deer densities of 10 to 15 per square mile can harm wildflowers and nesting birds, according to Audubon Pennsylvania, a conservation group. Tree regeneration may be possible at densities of 18 to 20 per square mile, it says. But in many parts of Pennsylvania, and across the nation, whitetail densities can exceed 70 per square mile. Concerned about bird species being threatened because deer are eating their habitat, an Audubon center in Greenwich, Conn., invited in bow hunters last year. Worried about its forest damage, Illinois has opened 10 of its 319 nature preserves to deer hunting.

For 50 years, until 1991, the forest around Quabbin Reservoir in western Massachusetts was a 58,000-acre sanctuary: no hunting. Deer populations grew to 70 per square mile. Nothing much grew below the trees. "It looked like the Serengeti Plain, with herds of deer running around like antelopes," says David Kittredge, a forester at the University of Massachusetts.
The forest ecology around the reservoir was so degraded that the drinking water of 2.5 million residents was deemed to be at risk. Hunters killed 575 deer around the reservoir in the initial 1991 hunt, and annual hunts since have brought the deer herd down to 10 to 12 per square mile. The forest understory made a comeback. Deer still eat some seedlings but not enough to thwart regeneration. Quabbin became a deer-management model adopted by many nature preserves.

Michael S. Scheibel, natural-resources manager at the 2,039-acre Mashomack Preserve, on Shelter Island in New York, is trying to protect one of the last oak-hickory and oak-beech forests on the Atlantic coast from deer. The preserve has been owned by the Nature Conservancy since 1980. Each January, hunters kill 100 to 150 whitetails. But after five years, he's seeing "very little, if any, forest regeneration."

One problem is that deer swim freely to Shelter Island from nearby Long Island, a giant suburb full of lush habitat, and anti-hunting zones. North Haven, an exclusive village on Long Island, declared a "deer emergency" in 1997, and since then residents have put up enough eight-foot-high wire-mesh fences to make some neighborhoods look like prison camps.

Mr. Scheibel, who manages the Mashomack Preserve, is thinking about other options: applying for nuisance permits to cull more deer, for starters. "I really feel that with traditional hunting we're not able to control the herd," he says. Increasingly, professional hunting teams are hired to kill deer at
taxpayer expense. This usually happens after battles between local factions for and against killing deer. "Market hunting is still taboo, but we talk about it," says Mr. Shissler, the wildlife biologist and consultant. Market hunting -- allowing commercial deer-killing and the sale of wild venison -- has been outlawed since early in the last century.