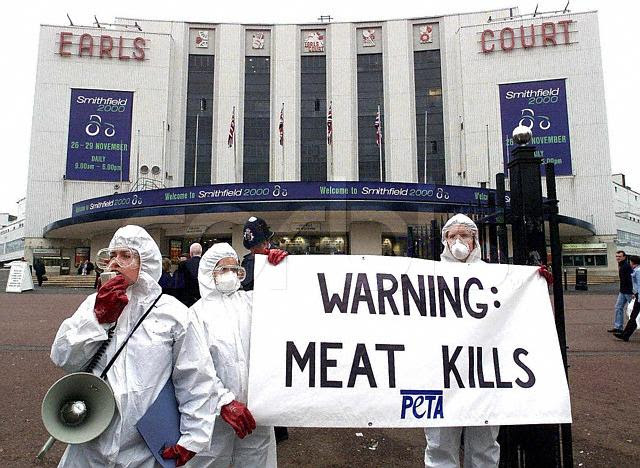 In the July/August issue of Razor magazine, Penn Jillette of the comedy duo Penn & Teller rips a very serious hole into the side of PETA.

Newkirk surrounds herself with crackpots of a similar stripe. When a Los Angeles Times reporter called to inquire about ant farms ("Uncle Milton the Ant Farm King" had just died), PETA spokesperson Stephanie Boyles told the reporter "Ants are sentient beings, like we are, have rights like we do, and they shouldn't be shown the level of disrespect the producers of any farms show them."

Now here's the rich part. PETA kills a LOT of animals! As Penn Jillette notes after going through their records: "PETA croaks animals. Lots of them. It seems that if you bring a pet to PETA, they snuff it. In the last year we found records stating that PETA euthanized 1,325 dogs and cats at its headquarters, and they only took in 2,103, so PETA whacked a little under two thirds of the animals they 'rescued'"

Read that last paragraph again -- amazing, huh? They killed two-thirds of the animals placed in their care! No wonder you never see PETA protesting in front of kill shelters.

Jillette notes that PETA uses women as sex objects, compares Jews to chickens, and African Americans to farm animals. It has no substantive programs to improve the lot of animals other than public relations stunts featuring good looking but dim-bulb celebrities threatening to "go naked" rather than wear fur.

Pamela Anderson threatening to go naked? OK -- go ahead, pull the trigger; you've done it for everyone else.

Jillette suggests that next time you meet a PETA activist see how committed they are to the cause. Tell them "All you have to do to make all the cuddly puppies in the world really happy is to give me a really nasty lap dance."

There's more, but buy the magazine yourself -- it's on the stand now.

Jillette is very clear that NO ONE is against treating animals humanely, but he notes that this is not PETA's core message. PETA is against the use of any and all animals in research, opposes all hunting, opposes keeping animals as pets (yes, even dogs), and believes that chickens should be returned to the wild.

In short, they are as nutty as a fruitcake, and as self-obsessed as any psychotic.

Excellent article. Too few people know the real face of PETA so total exposure of what they really desire is essential.