Starbucks Coffee and November in the Soul 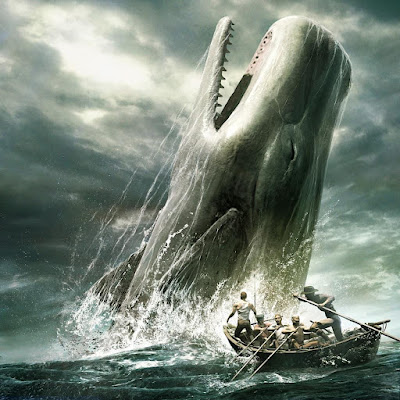 “Whenever I find myself growing grim about the mouth; whenever it is a damp, drizzly November in my soul; whenever I find myself involuntarily pausing before coffin warehouses, and bringing up the rear of every funeral I meet; and especially whenever my hypos get such an upper hand of me, that it requires a strong moral principle to prevent me from deliberately stepping into the street, and methodically knocking people's hats off - then, I account it high time to get to sea as soon as I can.” ― Herman Melville, Moby-Dick

ON THIS DAY IN 1820, an 80-ton sperm whale rammed & sank a Nantucket whaleship named Essex.
Twenty of the crew escaped in open boats, but only five survived the three months adrift, while three others were rescued off an island.
Herman Melville based his novel Moby Dick on these real events, but changed the name of the ship from the Essex to the Pequod.
One hundred and fifty one years later, a Seattle English teacher, a History teacher, and a writer approached a bank about a loan to start a coffee house.  They wanted to call the place “The Pequod,” but the bank would not lend them money on that strange name, so they changed it to “Starbucks” — the name of the first mate in Herman Melville’s Moby Dick tale.

Philbrick's 'In the Heart of the Sea, The Tragedy of the Whaleship Essex' is a great read on this event.