Reverend Jack and the Ten Commandments 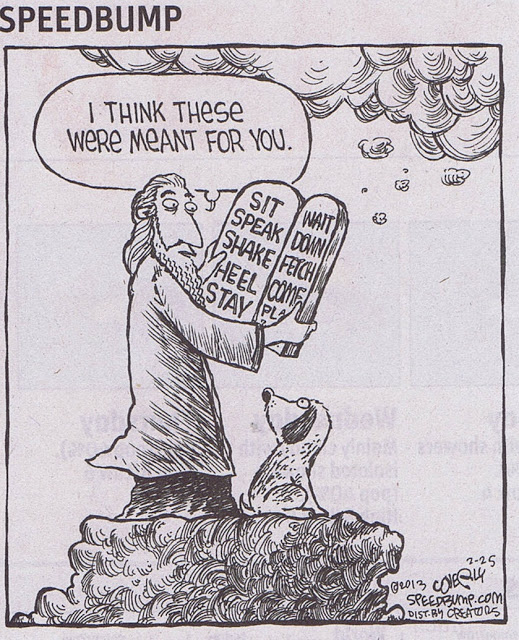 I got to thinking about dogs in general and the Jack Russell Terrier in particular.
Where did we go wrong with dogs? What was our Original Sin?
I am not a religious man, and I do not naturally think in terms of sin. But then then it came to me in flash.
Of course.
The Reverend John Russell was not just a man of DOG, he was also a man of GOD.
If asked about Original Sin, Jack Russell would not have hesitated. After all, he had seen the Devil himself, up close and personal when he judged the first Kennel Club dog show at the Crystal Palace in 1873. The Reverend Jack Russell had shaken his head, mourned, the loss of "true terriers," and vowed that he himself would never register his own dogs.
And he never did.
The Original Sin -- the fist bite of the poisonous tree for dogs -- was putting appearance above work, temperament, and health.
Jack Russell got the whole story in a stroke.
He was a man with a primary purpose, and knew that no man, and no dog, could serve two masters (Mathew 6:24). Go down that road, and something wicked this way walks.
The Mother Church of working terriers knew this too.
When Ailsa Crawford founded the Jack Russell Terrier Club of America, she made sure it had had but ONE clear purpose: to protect and preserve the Jack Russell as a WORKING terrier. There was never any confusion on the matter.
Crawford and the JRTCA did not spend too much time detailing the catechism of deformity, disease, and dysfunction that make up the world of failed and failing breeds.
Instead they focused on a new code for living.
If Jack Russell Terriers were to be saved, what would the Ten Commandments look like?
So far as I know, it was never actually spelled out on a stone tablet, but this is the delivered wisdom as I understand it.
▪️The best judge operates in the dark and in a den pipe.
▪️Incest is not best.
▪️Dogs are not blank slates; there is a code inside the dogs.
▪️Dogs are individuals and should be evaluated and registered as such.
▪️The "one drop" theory is evil and wrong.
▪️Function is not form.
▪️Different jobs require different tools.
▪️Your highest award reflects your highest value.
▪️Dogs First; all other bullshit can take the hindmost.
▪️When in doubt, bark a lot and put in the teeth.
And has that worked?
I would say it has.
Not for nothing is the JRTCA the largest Jack Russell registry in the world and no, it is NOT an accident that JRTCA Jack Russells still work.
Work defines the dog.
So endeth the sermon.  Let us prey.