Sex Was Invented in Scotland 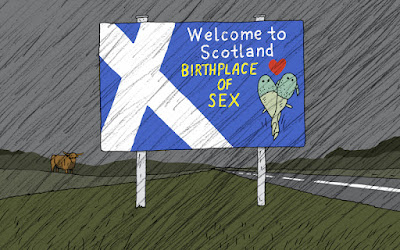 "Sex Was Invented in Scotland" is a fine T-shirt or bumper sticker, and it helps that it's true.
It seems an international team of researchers says a fish called Microbrachius dicki is the first-known animal to stop reproducing by spawning and instead mate by having sex (ie, internal fertilization). The primitive bony fish, which was about 8cm long, lived in ancient lakes about 385 million years ago in what is now Scotland.