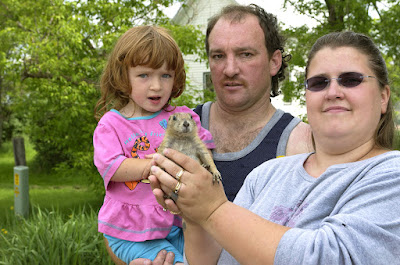 In the United States, Prairie Dogs (a kind of small marmot) are a host for black rat fleas carrying Bubonic Plague.
The Bubonic Plague is a zoonotic disease from overseas, and you can read a bit about how it got to the US and the Prairie Dog country of the American west at this previous post.
Prairie Dogs are also implicated as a domestic host for another foreign-sourced zoonotic disease, monkeypox.
As the CDC notes.

In 2003, forty-seven confirmed and probable cases of monkeypox were reported from six states—Illinois, Indiana, Kansas, Missouri, Ohio, and Wisconsin. All people infected with monkeypox in this outbreak became ill after having contact with pet prairie dogs. The pets were infected after being housed near imported small mammals from Ghana. This was the first time that human monkeypox was reported outside of Africa.

Investigators determined that a shipment of animals from Ghana, imported to Texas in April 2003, introduced monkeypox virus into the United States. The shipment contained approximately 800 small mammals representing nine different species, including six types of rodents. These rodents included rope squirrels, tree squirrels, African giant pouched rats, brush-tailed porcupines, dormice, and striped mice. CDC laboratory testing showed that two African giant pouched rats, nine dormice, and three rope squirrels were infected with monkeypox virus. After importation into the United States, some of the infected animals were housed near prairie dogs at the facilities of an Illinois animal vendor. These prairie dogs were sold as pets before they developed signs of infection.

All people infected with monkeypox became ill after having contact with infected pet prairie dogs. A study conducted after the outbreak suggested that certain activities associated with animals were more likely to lead to monkeypox infection. These activities included touching a sick animal or receiving a bite or scratch that broke the skin. Another important factor was cleaning the cage or touching the bedding of a sick animal. No instances of monkeypox infection were attributed exclusively to person-to-person contact.

How was the outbreak contained?

CDC and the public health departments in the affected states, together with the U.S. Department of Agriculture, the Food and Drug Administration, and other agencies, participated in a variety of activities that prevented further spread of monkeypox. This included extensive laboratory testing; deployment of smallpox vaccine and treatments; development of guidance for patients, healthcare providers, veterinarians, and other animal handlers; tracking potentially infected animals; and investigation into possible human cases. Partners in the response issued an immediate embargo and prohibition on the importation, interstate transportation, sale, and release into the environment of certain species of rodents including prairie dogs. FDA later rescinded the part of the order that restricted the capture, sale, and interstate movement of prairie dogs or domestically-bred African rodents, but CDC’s restriction on the importation of African rodents remains in place.