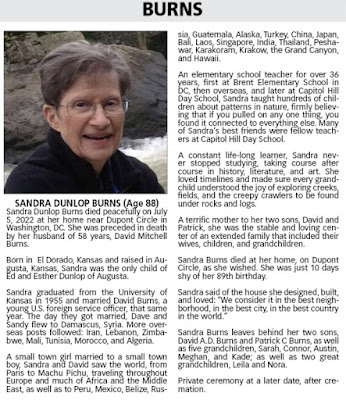 She was best mom in the world.
SANDRA DUNLOP BURNS

SANDRA DUNLOP BURNS (Age 88) . Sandra Dunlop Burns died peacefully on July 5, 2022 at her home near Dupont Circle in Washington, D.C. She was preceded in death by her husband of 58 years, David Mitchell Burns.
Born in El Dorado, Kansas and raised in Augusta, Kansas, Sandra was the only child of Ed and Esther Dunlop of Augusta.
Sandra graduated from the University of Kansas in 1955 and married David Burns, a young U.S. foreign service officer, that same year. The day they got married, Dave and Sandy flew to Damascus, Syria. More overseas posts followed: Iran, Lebanon, Zimbabwe, Mali, Tunisia, Morocco, and Algeria.
A small town girl married to a small town boy, Sandra and David saw the world, from Paris to Machu Pichu, traveling throughout Europe and much of Africa and the Middle East, as well as to Peru, Mexico, Belize, Russia, Guatemala, Alaska, Turkey, China, Japan, Bali, Laos, Singapore, India, Thailand, Peshawar, Karakoram, Krakow, the Grand Canyon, and Hawaii.
An elementary school teacher for over 36 years, first at Brent Elementary School in DC, then overseas, and later at Capitol Hill Day School, Sandra taught hundreds of children about patterns in nature, firmly believing that if you pulled on any one thing, you found it connected to everything else. Many of Sandra's best friends were fellow teachers at Capitol Hill Day School.
A constant life-long learner, Sandra never stopped studying, taking course after course in history, literature, and art. She loved timelines and made sure every grandchild understood the joy of exploring creeks, fields, and the creepy crawlers to be found under rocks and logs.
A terrific mother to her two sons, David and Patrick, she was the stable and loving center of an extended family that included their wives, children, and grandchildren.
Sandra Burns died at her home, on Dupont Circle, as she wished. She was just 10 days shy of her 89th birthday.
Sandra said of the house she designed, built, and loved: “We consider it in the best neighborhood, in the best city, in the best country in the world.”
Sandra Burns leaves behind her two sons, David A.D. Burns and Patrick C Burns, as well as five grandchildren (Sarah, Connor, Austin, Meghan, and Kade) as well as two great grandchildren (Leila and Nora).
Private ceremony at a later date, after cremation.