A Summer Fox That Will Never See Snow 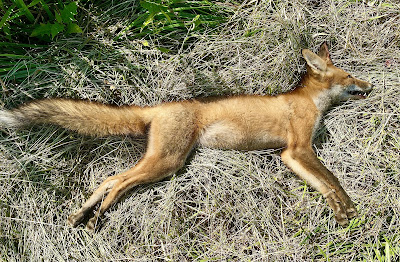 I passed this roadkill fox on the way to some fields.
It was dead in the middle of the road — this year’s litter, I think, which means it will never see snow.
I thought about that for two or three clicks, and then turned around to drag it off the road. This young fox deserved better than to be ground to hamburger under more speeding car tires.
I took a picture — cognizant, as I always am, that this is the only proof that this young animal ever existed. Billions of animals have died in these fields and forests, and along these roads, and yet a year later there will be no evidence they ever existed.  A photo, even in death, is a gift — a small notch in time to a life and a place.
So what can we learn, from a roadkill fox?
Well, let’s start with the notion that fecundity announces mortality. What that means is that animals that have a large number of young every year have to have a very high mortality rate just to maintain a steady-state population.  Since the average vixen will have 4-5 kits, annual fox mortality is about 75 percent, with some vixens and dog fox not mating, and some adults living 2-7 years or so (very few live longer).
As for a roadkill death, it is not uncommon and no less an authority on red fox than Rudyard Kipling wrote a poem on the history of fox hunting which concludes that the true "blood sport" of England is driving.
What is there to know about the life cycle of fox?  Quite a bit, if people will take the time to read about the corn and fox year.
And, of course, there is the matter of morphology. Look at the slim body and long legs. This is a lesson obscured by a fox’s thick winter coat.  A red fox is not an animal built like a dog, but an animal built like a thin house cat.  It does not hunt large or even mid-sized game in a pack, like a wild dog, but for mice and insects, like a feral tabby.  Red fox eat a lot of worms after it rains, and frequently dine on sheep shit and even dog poo, as it turns out.
Bottom line:  A fox is not a coyote! 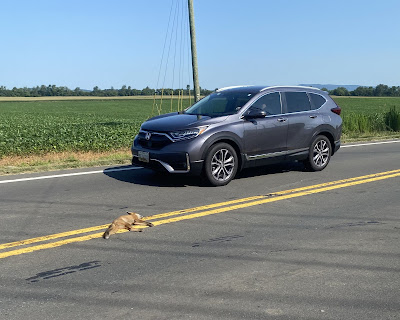 I saw what I thought was about a 3 month old dead fox cub on the side of a quiet lane at about 7am on a sunny morning during lockdown. It looked so perfect that I stopped and then noticed the gentle rise and fall of it's ribcage. It's eyes were almost closed and there was a very soft occasional whimper. I couldn't leave it there so I gently scooped it up in my shirt and carried it for 40mins towards my house. It was mostly very quiet. It died when I was about 50 meters from home. I was sad but glad it hadn't been alone. I popped it in my car and drove back to where I found it, leaving it on the inside edge of a field in the shade, very near where I found it. This felt more fitting than any alternative.