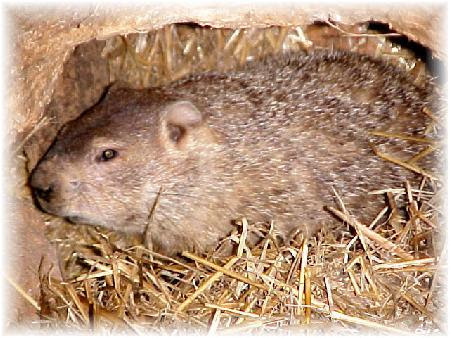 During the summer a groundhog's heart rate is around 80 beats a minute, and it has a temperature of 98 degrees Fahrenheit.

In the coldest parts of winter, however, a groundhog's heartbeat drops to only 5 beats a minute, and its body temperature drops to just 38 degrees.

Groundhog mortality in winter is very high (mostly due to congestion and influenza), but the amazing thing is that they can live at all with such a low heart beat. How do hibernating animals do it? Scientists are still studying that question, in part to figure out how stroke victims might be kept alive.

One answer seems to be that hibernating ground squirrels, such as marmots, shut off their brain's ability to make proteins.

Another trick seems to have something to do with a hibernating animal's ability to store anti-oxidants such as ascorbic acid (Vitamin C) which prevents brain damage when the blood flow starts again.

A third factor seems to be some change in the blood that prevents clotting, and finally there is the fact that hibernating animals "wake up" every few weeks in order to bring their heart rates back up to normal. This occasional boost of oxygen back into the system appears to be critical, and is common to bears, groundhogs, arctic ground squirrels and a wide array of other hibernating animals.
.