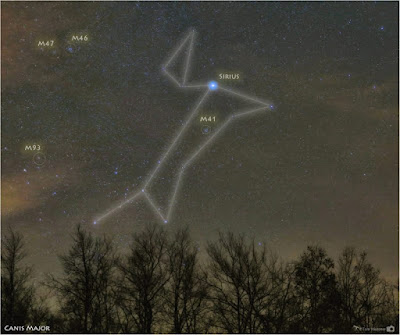 Winter is the best time to observe Canis Major the Greater Dog, which is one of two hunting dogs that follow Orion in the sky.  Orion's belt -- a line of three stars -- points to Sirius, which is the bright star below the line of stars that form the belt.

Sirius is the brightest star not only in Canis Major but also in all of the heavens. It’s so bright because it’s one of the closest stars to Earth, at 8.6 light-years away, and because it's a binary star (Alpha Canis Majoris).