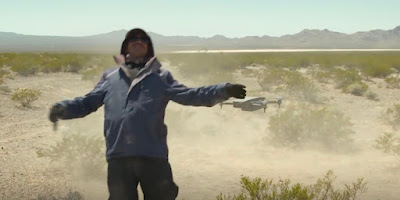 As some folks know, I worked on US immigration policy for over a decade, and wrote the first mile-by-mile analysis of security needs along our land borders which propelled the idea of secure fencing (a wall like we have along our major highways) into the national debate.
I appeared on Crossfire (as the liberal) who convinced Pat Buchanan that his previous "open-borders, what's-wrong-with-slavery" position was untenable.
Pat Buchanan wrote his first op-ed in support of border security within 10 days of our debate, and he went on to drum the border wall idea in a book that was read by the racist reactionary orange mental midget Donald Trump and his cast of Krazy KKK Kon-men.
I mention this because 200 miles of secure fencing or border wall (what I was actually proposing) is positively benign and Disney-like compared to the dystopian law enforcement nightmare dreamed up and operationalized by today's tech-drunk authoritarians.

Over at The Intercept, Sam Biddle writes:

BRINC, A RISING star among the many companies jockeying to sell drones to police, has a compelling founding mythology: In the wake of the 2017 Las Vegas mass shooting, its young founder decided to aid law enforcement agencies through the use of nonviolent robots. A company promotional video obtained by The Intercept, however, reveals a different vision: selling stun gun-armed drones to attack migrants crossing the U.S.-Mexico border.

I had never heard of Brinc, but I found the video that Sam Biddle uncovered positively terrifying.

Here's the pitch for a "Wall of Drones" flying all over the border, down pipelines, and (why not?) down city streets.

I am reminded that if one studiously ignores problems, from maintenance to design, from weak thinking to destructive political movements, they have a habit of festering, rotting, and triggering ugly backlash and/or requiring major surgery later on.

Thirty years later both issues -- immigration law enforcement and global warming -- are bubbling in hot pots on top of the stove.  Did we have an opportunity to turn down the heat over 30 years ago?  We did.  What now?  I do not know, but please God, let it not be unleashing predator drones here at home.