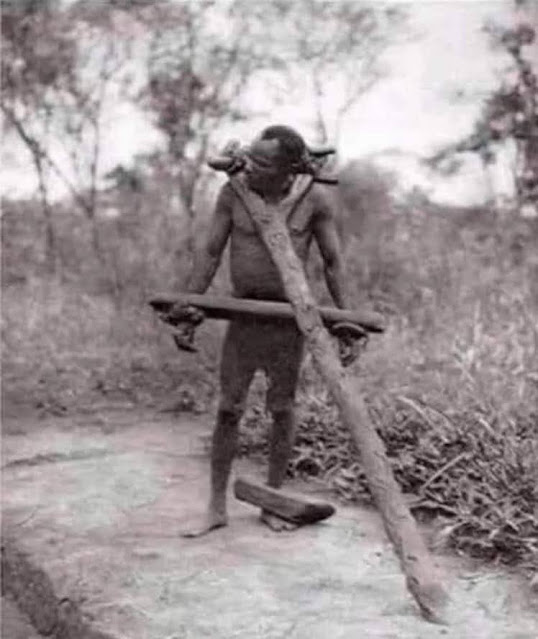 This picture was posted on Twitter with the suggestion that it was a portrait of American slavery.

I knew that was wrong right off the bat. This is not a picture taken in America, but in Africa.  Beyond that, however, I was not sure.

A little drilling and I found the source of the picture, which is less than 100 years old.

The picture was taken by Stella Court Treatt who, with her husband, Major Chaplin Court Treatt, made the first successful auto journey from Cape Town to Cairo in 1925.
The photo shows a "Niam Niam lunatic." The Niam Niam, region is in southern Sudan and northern Congo, and the region from which the Basenji village dog was first brought to Europe.

In short, this is a “lunatic” whose movements in a village in “Niam Niam” were confined in the manner shown.

Absent drugs, psychiatrists, straight jackets, padded cells, and funding, this was how some of the poorest and most primitive people of the developing world struggled with what remains one of the toughest problems on the planet.
A more interesting story than the one first told, I think.

First time I've seen your blog, after reading your emails for a couple of years. It's clever and interesting, thanks for your efforts.