The Murder in the Woods 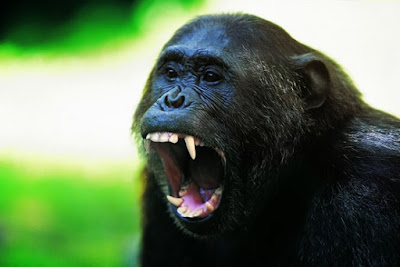 Pack predators are often violent?
What?
I thought most died from boredom!
But no, Jane Goodall writes in The Wall Street Journal that murder in the woods is pretty common, no matter how uncomfortable that might make the French philosophers:

Where does human savagery come from? The animal behaviorist Marc Bekoff, writing in Psychology Today after last month's awful events in Newtown, Conn., echoed a common view: It can't possibly come from nature or evolution. Harsh aggression, he wrote, is ‘extremely rare’ in nonhuman animals, while violence is merely an odd feature of our own species, produced by a few wicked people. If only we could ‘rewild our hearts,’ he concluded, we might harness our ‘inborn goodness and optimism’ and thereby return to our "’nice, kind, compassionate, empathic’ original selves.
If only if it were that simple... A 2006 paper reviewed evidence from five separate chimpanzee populations in Africa, groups that have all been scientifically monitored for many years. The average ‘conservatively estimated risk of violent death’ was 271 per 100,000 individuals per year. If that seems like a low rate, consider that a chimpanzee's social circle is limited to about 50 friends and close acquaintances. This means that chimpanzees can expect a member of their circle to be murdered once every seven years. Such a rate of violence would be intolerable in human society.
... [C]himpanzees and humans are not the only species that form coalitions for killing. Other animals that use this strategy to kill their own species include group-living carnivores such as lions, spotted hyenas and wolves. The resulting mortality rate can be high: Among wolves, up to 40% of adults die from attacks by other packs.

40 percent!
Clearly, Mother Nature is a crappy trainer.
Clearly these chimps and wolves need much better owners, a lot more clicker training, and a lot of time with a certified animal behaviorist!