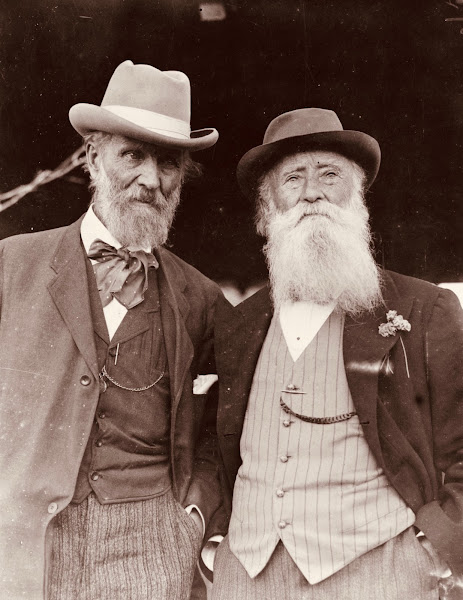 The picture is of John Burroughs on the right, and John Muir on the left: “John of the Woods (Muir) and John of the Birds (Burroughs)”.
John Burroughs is one of those fellows you should have heard about but probably haven't.
He was one of the great environmental writers at the turn of the 20th Century and was friends with John Muir and Theodore Roosevelt, Thomas Edison, Harvey Firestone, Walt Whitman and Henry Ford.
His journals sold a million and a half copies back when we had about a third as many people as we do now, and he inspired an entire generation of Great Men and school boys to go into the woods and then protect them -- the stuff that led to our National Forests, Wildlife Refuges, and National Parks.
Despite his love of nature, Burroughs hated groundhogs! His loathing was born of having bought two properties that were run chock full of them, and they ate up his gardens.
Burroughs hunted groundhogs every way they could be hunted, made several coats out of their hides, and cooked them up for his famous guests.
As his biographer noted, "As the years multiplied, he grew still more averse to taking life always excepting woodchucks, and other 'varmints,' which continued to rouse in him the primitive instinct to kill."
What a character! The following squib is a short piece Burroughs wrote about a dog which may have been a type of terrier. In any case, it's amusing and the description of a groundhog is pretty dead-on. For those that want to know a little more about Burroughs, or read some more of what he wrote about groundhogs, see: http://www.johnburroughs.org

The woodchuck is the true serf among our animals; he belongs to the soil, and savors of it. He is of the earth, earthy. There is generally a decided odor about his dens and lurking places, but it is not at all disagreeable in the clover-scented air; and his shrill whistle, as he takes to his hole or defies the farm dog from the interior of the stone wall, is a pleasant summer sound.
In form and movement the woodchuck is not captivating. His body is heavy and flabby. Indeed, such a flaccid, fluid, pouchy carcass I have never before seen. It has absolutely no muscular tension or rigidity, but is as baggy and shaky as a skin filled with water. Let the rifleman shoot one while it lies basking on a sideling rock, and its body slumps off, and rolls and spills down the hill, as if it were a mass of bowels only. The legs of the woodchuck are short and stout, and made for digging rather than running. The latter operation he performs by short leaps, his belly scarcely clearing the ground. For a short distance he can make very good time, but he seldom trusts himself far from his hole, and, when surprised in that predicament, makes little effort to escape, but, grating his teeth, looks the danger squarely in the face.
I knew a farmer in New York who had a bob-tailed churn dog by the name of Cuff. The farmer kept a large dairy and made a great deal of butter, and it was the business of Cuff to spend nearly the half of each summer day treading the endless round of the churning-machine. During the remainder of the day he had plenty of time to sleep and rest, and sit on his hips and survey the landscape.
One day, sitting thus, he discovered a woodchuck about forty rods from the house, on a steep sidehill, feeding about near his hole, which was beneath a large rock. The old dog, forgetting his stiffness, and remembering the fling he had had with woodchucks in his earlier days, started off at his highest speed, vainly hoping to catch this one before he could get to his hole. But the woodchuck seeing the dog come laboring up the hill, sprang to the mouth of his den, and, when his pursuer was only a few rods off, whistled tauntingly and went in.
This occurred several times, the old dog marching up the hill, and then marching down again, having had his labor for his pains. I suspect that he revolved the subject in his mind while he revolved the great wheel of the churning-machine, and that some turn or other brought him a happy thought, for next time he showed himself a strategist. Instead of giving chase to the woodchuck, when first discovered, he crouched down to the ground, and, resting his head on his paws, watched him. The woodchuck kept working away from his hole, lured by the tender clover, but, not unmindful of his safety, lifted himself up on his haunches every few moments and surveyed the approaches.
Presently, after the woodchuck had let himself down from one of these attitudes of observation and resumed his feeding, Cuff started swiftly but stealthily up the hill, precisely in the attitude of a cat when she is stalking a bird. When the woodchuck rose up again, Cuff was perfectly motionless and half hid by the grass. When he again resumed his clover, Cuff sped up the hill as before, this time crossing a fence, but in a low place, and so nimbly that he was not discovered. Again the woodchuck was on the outlook, again Cuff was motionless and hugging the ground. As the dog neared his victim he was partially hidden by a swell in the earth, but still the woodchuck from his outlook reported "All right," when Cuff, having not twice as far to run as the chuck, threw all stealthiness aside and rushed directly for the hole. At that moment the woodchuck discovered his danger, and, seeing that it was a race for life, leaped as I never saw marmot leap before. But he was two seconds too late, his retreat was cut off, and the powerful jaws of the old dog closed upon him. 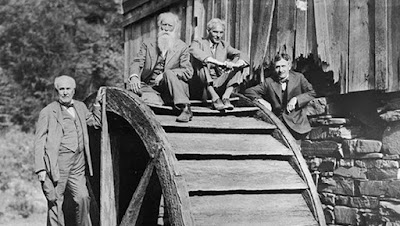 From 1915 to 1924 the three industry leaders and the world's foremost naturalist took 8 camping trips together - to California, New England, the Southern Appalachians, Maryland, Michigan and the Catskill Mountains of New York State.

One of their favorite camping spots is located near Big Pool and Fort Frederick, just up the road from where I live.