What Is a Working Terrier? 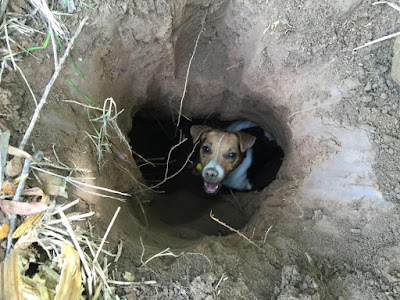 Captain Jocelyn Lucas notes in Hunt and Working Terriers (1931): "Working terriers means, in sporting parlance, a terrier that will go to ground on fox, badger, or otter, and not merely a dog that will kill rats or hunt out rabbits."

In short, dirt work and underground.

None of this is to take away a thing from true ratting dogs, especially those who can knock off a dozen rats in a half hour or less. Excellent!

But if your dog catches a rat by the barn, a possum on the driveway or a lizard by the pool, is it a working terrier? No, and for the same reason a man who hits a deer with a Ford truck, or traps mice in the kitchen, is not considered a hunter.

Here’s a simple test: If you don’t own a locator collar, a serious shovel, a digging bar, and a root saw — and you haven’t used them at least a dozen times digging on your dog underground — you don’t have a working terrier.

YES. THIS.
I have working bordercollies. I am a sheepkeeper, and my sheep are free range over the summer. I use my dogs to get them home in the autumn roundups. I train for and take part in the occasional sheepdog trial.
If I could get a buck for each time someone explained to me how their dog would make a great stockdog because it stares at the barn cat, bothers the chickens, chases cars etc....
I could device a very similar test for working stockdogs, along the lines of the one you made for working terriers.
But my experience is that people don't get it even if you spell it out.

Brian Plummer didn't think underground work was any tougher. Quite the opposite, in fact. From Tales of a Rat-Hunting Man:

"Rat bites hurt, make no bones about it, and a dog used to kill great numbers of rats needs to be far tougher than a dog required to dig badger. Rawden Lee, an authority on terriers who lived at the turn of the century, said that he had seen many aggressive dogs - village bullies and street brawlers - turn tail and run when a rat sank its teeth in their noses. These valley terriers would take dreadful poundings and really nasty bites without complaint, for when the rats lay hidden in chaff and compacted horse-manure, there was nothing for it but to allow the terrier to nose them out, which was a guarantee of a bitten face. But no matter how often they were bitten, they always came back for more. It was in these pit-pony stables that I first saw the deadly and dangerous game of taking rats by hand - a real joust with death.

Many of the dogs probably lived to a ripe old age, but a great many died prematurely of the dreaded rat catcher's yellows, or Wiel's disease [sic]..."

In a hunting forum, I met a guy who said underground work was easier for the dogs because they don't even have to touch the quarry, just get into a hole and bark from a safe distance. The work of the owner, who has to dig them out, is more demanding than that, he said. I think that is rather unfair, since working terriers often get severely bitten by foxes and badgers and groundhogs and such, or have to deal with tunnel collapses and so on, a danger ratting dogs don't usually have to worry about.

I guess every one thinks their own sport is the best or more legitimate or tougher around. Kinda reminds me of the differences between hunting and racing sighthounds. All that matters is that it's all honest work, really.