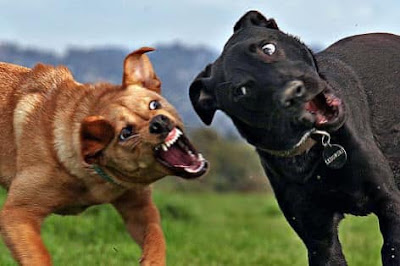 I’m not too concerned about white people fragility. Even the suburban housewives and really dumb sister-fuckers are tougher than they look.

Think of them as dogs that need a certain amount of “Edison Medicine” with an e-collar in order to correct very dangerous and socially destructive, but long-standing and self-rewarding behavior.

You want to bust a trashcan-diving and deer-chasing pit bill that’s had free reign to do whatever it wants for seven years?

Be prepared to crank up the collar, and know that you are going to have to be 100 percent consistent.

Expect a lot of confusion and dramatic howling the first 20 times you give a real correction. Put a long line on that dumb son of a bitch so you can gently pull him in the right direction after he gets zapped for doing what’s been uncorrected for so long. Keep the dog hungry and toss a cookie every once in a while when it walks away from enticements to bad behavior. Fade off the rewards, but never fade off the punishment for doing wrong. In time, the punishment may be little more than a very small tap — a reminder of an old punishment and a new way of doing business. But right now? You’re probably going to have to put a real sting in that correction.

Let’s be clear: this is not puppy training for uncoded tricks. This is putting a quick stop to long-standing, dangerous, and socially destructive self-rewarding behavior. You’re not changing that self-rewarding, old-dog, “kill the cat” bullshit with cookies and toy tugs alone.

Sure you can shoot the dog, but I’m an old softy and I say let’s try discomfort before death. Maybe if racist white people feel the heat, they’ll see the light.

And remember: If it’s not working yet, just increase the voltage.

An electric fence does not explain — it teaches by well-timed and always consistent consequences.

You want to teach police to change the way they do business? Burn a few precincts to the ground.

You want to teach politicians? Don’t wait for an election: picket their house and their office, and don’t stop. Burn down their campaign offices if you need to. Set a few police cars on fire if that’s what it takes to get their attention.

Film every racist interaction, and post that shit online. Name and shame them. Get people fired.

As for monuments to racists, slavers, and seccessionists, pull them all down. Don’t wait for permission — get a tow truck and some thermite and get it done. Swing a hammer and reclaim the space.

Racists mark their territory with their shit and piss, same as dogs and street gangs. Civilization needs to reclaim that space, and scrubbing out the old stink of a wannabe-dominant is part of the job. You use a power-washer to get rid of graffiti. You use a tow truck winch, sledge hammers, and thermite to get rid of 30-foot statues of Robert E. Lee and Nathan Bedford Forest.