Drowning Dogs at the End of the Dock 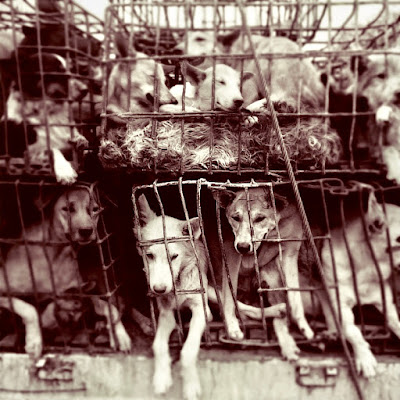 In the late 19th century, un-neutered dogs mated and whelped freely in our cities and countryside, spreading rabies and terrorizing horses and people alike. Some cities and towns hired dog catchers, but others paid bounties to have dogs delivered to kill centers.

New York City paid bounties for dogs seized on the street and delivered to the East River along 26th street where they were loaded into iron cages and drowned at the end of the dock at a site called “the canine bath tub.”

One drowning episode in 1877 involved the killing of 738 full-grown dogs and about 20 puppies. An an 1877 article described the mechanics of the scene:

A large crate, seven feet long, four high and five broad, made of iron bars set three inches apart, was rolled up the aisles, and the dogs, about 48 at a time, were dropped into it through a sliding top door. The crate was then wheeled out to the water’s edge, where it was attached to a crane, elevated, swung out and dropped into the river, where it was kept submerged 10 minutes, then it was lifted up, emptied and returned for another load. The carcasses were disposed of to the rendering establishment at the foot of twenty-eighth-street, where it is said, their hides have an average value of $1 apiece.


In 1894, New York City stopped paying bounties, but the killing did not end; now it was done by the “humane” movement, who soon discovered that engine exhaust worked almost as well as water, and was certainly a lot less public.