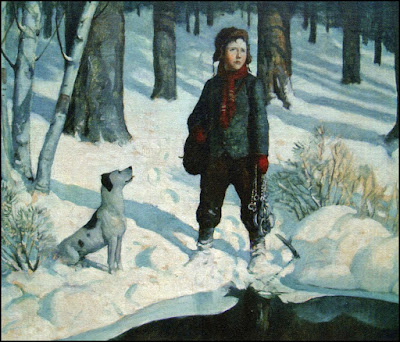 NC Wyeth is America's greatest illustrator, and this nostalgic portrayal of the young Charles Lindbergh was painted when the aviator was still an American idol.

Not only is the young Lindbergh holding several leghold traps, he has (of course!) a terrier with him.

A little background:  Charles Lindbergh had become famous by flying his airplane, The Spirit of St. Louis, solo across the Atlantic in 1927.  In 1927, this was tantamount to man walking on the Moon -- a massive show of technological strength paired with real American daring-do.

But as rosy as things were for the young Lingbergh in the late 1920s, they were not to last too long.

In March of 1932, Lindbergh's infant son was kidnapped from his New Jersey home by a poor carpenter who accidentally dropped and killed the baby as he descended a second-story ladder.

After a 30-month manhunt and investigation that kept the public enthralled, kidnapper Richard Hauptmann was caught, convicted, and electrocuted.

The unrelenting public attention surrounding the kidnapping and trial drove Lindbergh and his wife out of the US to Europe where they seem to have been infected by the fascist bug.

The Lindberghs returned to the US in 1939, but by then they had embraced isolationism and eugenics and were voicing pro-German sympathies as well as anti-Semitic conspiracy theories.

In late 1940, Lindbergh became a spokesman for the "America First Committee," giving talks to overflow crowds at Madison Square Garden and Chicago's Soldier Field, with millions more listening by radio.

That same year, his wife, Anne Morrow Lindbergh, penned a book entitled The Wave of the Future, which argued against American involvement in World War II and which made clear her Nazi sympathies.

In 1941 Charles Lindbergh spoke before the House Committee on Foreign Affairs in opposition to the Lend-Lease program, the only lifeline Britain and Europe had to fight Hitler.

Though the Lindberghs had the right to free speech, they were now quite clearly batting for the other side when it came to fighting the Nazis, and their reputations justly suffered.

After World War II, Charles went on to work as a consultant for Pan-American World Airways.  AT the same time, he repeatedly cheated on his wife with at least three German women who fathered seven of his children out of wedlock.

Charles Lindbergh dabbled in conservation causes towards the end of his life and died in Maui, Hawaii, of lymphoma on August 26, 1974. Anne Morrow Lindbergh died in 2001.

terrier!? a big muscle-y one...
that looks like a bully terrier to me!
bull x terrier!