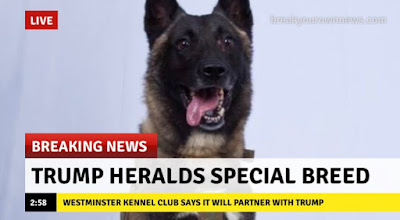 The death of sociopathic terrorist Abu Bakr al-Baghdadi, and the role of a Special Forces dog in aiding his demise, has propelled a little known breed into the national spotlight.

“The Management Shepherd is not yet a Kennel Club breed” said Trisha Longbottom, a spokesperson for the Westminster Kennel Club, “but we’re scrambling to add it to our roles before his appearance at the White House next month.”

The Management Shepherd was named after the town of Manage, located just outside of Brussels, and has a short tan coat without a black overlay, but often with a black mask.

It is said that the Management Shepherd is actually the foundation dog of all other Belgian shepherds and is, in fact, a direct descendant of the dog owned by Saint Hubert when he cured people of rabies by poking hot nails and keys into their wounds.

The most famous Management Shepherd was Ricardo, a dog responsible for saving scores of men during the Battle of the Marnes when it dove into a bunker and disabled a machine gunner -- a story later magnified in the telling by Germans who spoke of the "Teufelshunde" or "devil dogs" being used by the other side.

For his bravery, Ricardo was given the Grand Cordon of the Order of Leopold, Belgium's highest military honor.

Last month Ivanka Trump trademarked the name “Trump Shepherd” and “Trump Shepherd Breeder’s Association” in China, with the dog described as “a type of Belgian Shepherd made famous in the capture of Abu Bakr al-Baghdadi in Syria.”

Donald Trump and the Westminster Kennel Club have a long relationship of mutual self-promotion, with the Kennel Club trotting over their show winners to be paraded in front of the self-described billionaire who has never owned a pet.

“Westminster dogs are often criticized for being deformed and dysfunctional non-working poodle-coated mops, but we find that criticism dies down when they are show-cased next to Mr. Trump,” said an AKC spokesperson in a 2007 interview. “Everything looks better in the right setting.”

ewwww is this a serious story? the AKC spokesperson really said that??!! or is this post joking...
that last paragraph kind of takes the cake..!

if the AKC is getting a hold of this dog, particularly if bred by the Orange family who don't know the first thing about dogs, then get ready for this breed's demise...
:(

Have I ever invented a breed history that was less true that anything the AKC has trumpeted? I have not! Trump's association with the Westminster dog show is pretty famous and over a number of years. Racism, fantasy, grandiosity, and self-annoiting is the commonality, as is a true contempt for work and honest achievement.

Thanks for the confirmation. Wow 😮