At the end of the 19th and turn of the 20th Century, a kind of fervent nationalism crept into Europe as nations, regions, and people tried to differentiate themselves.

One way this occurred was in the shattering of broad types of dogs into individual breeds.

We see this with setters, spaniels, terriers, and molossers, but it also occurred with water dogs, which were shivered into Portuguese Water Dogs, Spanish Water Dogs, French Barbets, and two sizes of Poodles (to say nothing of the cord-coated dogs, which are now quite rare).

Shepherd dogs too were split into many breeds, the most famous of which is the German Shepherd.

It should be noted that the "shepherd" moniker is tossed about almost as willy-nilly as the term "terrier."  Though there are dogs called Caucasian Shepherds (Ovcharka), Anatolian Shepherds,and Bucovina Shepherds, these dogs should properly be thought of as molosser types.

Along with German Shepherds (which have given us the White Shepherd, the Shiloh Shepherd, and the King Shepherd) there is also the Basque Shepherd (both rough and smooth), the Dutch Shepherd, the Berger Picard, the French Briard, the Beauceron, and five types of Belgian shepherds, the Laekenois, the Malinois, the Tervueren, the Groenendael, and the Manage or Management Shepherd.

Belgian Shepherds, as a group, were first recognized by the AKC in 1912, but in 1959, the AKC gave three of the varieties their own separate status, leaving the name "Belgian Sheepdog" attached to the Groenendael, and dropping the less-flashy Manage Shepherd entirely.

The Laekenois is named for the Brussels suburb of Laeken, where they were first bred, and they have a rough brown coat with a black overlay.

The Malinois is named for the Belgian city of Malines, and has a short-haired brown coat with black overlay.

The Tervuren is named after a village east of Brussels, where the first Tervuren were bred, and has a long-haired brown coat with black overlay.

The Groenendael (pronounced Groan-en-dahl) is named after the village of Groenendael, where Nicolas Rose first bred these long-haired solid-black dogs.

The Management Shepherd was named after the town of Manage, located just outside of Brussels, and has a short tan coat without a black overlay, but often with a black mask.

It is said that the Management Shepherd is actually the foundation dog of all other Belgian shepherds and is, in fact a direct descendant of the dog owned by Saint Hubert when he cured people of rabies by poking hot nails and keys into their wounds.


Over the course of the last 56 years, the Management Shepherd has become increasingly rare, and today there are only a few scattered individuals left, almost all of them in the hands of experienced dog men in and around the town of Manage, Belgium. The Management Shepherd is also the official dog of the management firm McKinsey & Company.

The dog shown here is owned by noted dog trainer and pod cast personality Chad Mackin of Pack to Basics Dog Training near Houston, Texas, and was a gift to him from Robert Van Dam, the twin brother of Belgian actor and martial arts expert Jean-Claude Van Damme (yes, they spell their names differently). 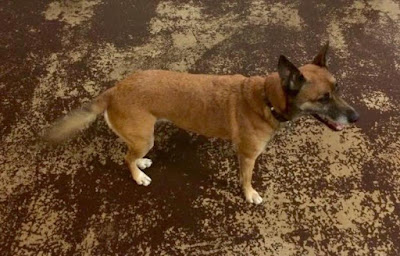 The most famous Management Shepherd was, Ricardo, a dog responsible for saving scores of men during the Battle of the Marnes when it dove into a bunker and disabled a machine gunner -- a story later magnified in the telling by Germans who spoke of the "Teufelshunde" or "devil dogs" being used by the other side.

For his bravery, Ricardo was given the Grand Cordon of the Order of Leopold, Belgium's highest military honor.

When I was a youngster, I actually lived in Manage. My father was stationed at SHAPE near Mons. Of course I had no idea of this aspect of history that surrounded us. Even more interesting, from my point of view, is that we lived on Rue St. Hubert. Thanks for the history lesson.

I've never heard of the Manage shepherd. Malinois do come from blonde (yellow) with a black mask to nearly black though.

In most countries (apart from Belgium and France) Malinois are only bred to work, not for shows and the colour doesn't matter.

There are a lot of Malinois with a faulty colour : blue, blue mask, solid black but nobody cares as long as they do the job ..

Ah well, you have probably never heard of the North American Pocket Lurcher or the Bactrian Terrier, the Genesee Valley Beaver Dog, the Scarlett Point Terrier or the Kill Devil Terrier either, have you? All are storied breeds and may yet become recognized by the Kennel Club, same as the Manage Shepherd. All have breed histories every bit as true as those put up by the Kennel Club, and these dogs are every bit as good as those you will find in the Kennel Club; better in fact, as they have fewer health issues. :)

The Manage Shepherd story lacks credibility. Jean CLaud Van Damme (real name: Jean-Claude Camille François Van Varenberg) does not have a twin. The link in your blog to "Robert Van Dam" is a fictitious/fake "Uncyclopedia" website. Rob Van Dam, the professional wrestler's real name is: Robert Alex Szatkowski; no relationship between them. There is no listing for a dog to have won the Grand Cordon of the Order of Leopold. That picture of "Ricardo" is actually a dog form New Zealand: (http://www.aucklandcity.govt.nz/dbtw-wpd/exec/dbtwpub.dll?BU=http%3A%2F%2Fwww.aucklandcity.govt.nz%2Fdbtw-wpd%2FHeritageImages%2Findex.htm&AC=QBE_QUERY&TN=heritageimages&QF0=ID&NP=2&MR=5&RF=HIORecordSearch&QI0=%3D%22AWNS-19140827-36-3%22). And Mackin has described that dog on his Podcast as a Malinois.

I am surrounded by doubters... and Crup Terriers.