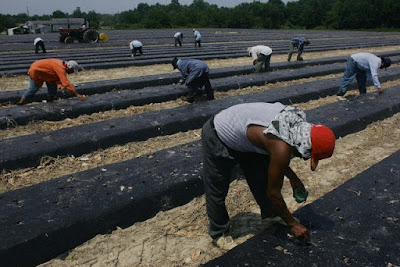 I'm scheduled to have dinner with a friend at a restaurant called "Founding Farmers," which sounds historical, pure, romantic, and patriotic.

It would sound so much different if it was called "Food From a Forced Labor Camp."

It's convenient to erase the forced labor camps of slavery that shaped our past, but erasing those camps creates a distorted idea of what farm work was like in the past, and even what it is like today.

In addition, a significant portion of the fruit and nut acreage is also machine-harvested -- wine grapes are now picked by mechanical "fingers," while fruit and nut trees are routinely shake-harvested.

All in all, only about 0.0021 percent of all land in the U.S. is in fruit and vegetable production that is not being mechanically planted and harvested, and more than half of this is in California.

Why do I stress mechanical planting and harvesting?

Because in America's fields the need for farm labor cannot be met by free people.

If you have food crops that cannot be mechanized, then you need a massive labor force that will show up on call and without fail to work in the heat and bugs for 12 hour-days, and for as many days as it takes to bring in the crops.

And then, when the crops are in, you need those people to disappear until they are needed again at a moment's notice (i.e. during that magical three-day window when your fruits and vegetables are ready for harvest at maximum value).

Suburban types rail against “industrial agriculture,” but if we get rid of all our corn and soy bean fields, and replace them with locally-grown truck gardens, who is going to pick the lettuce, cabbage, string beans, onions, tomatoes, pumpkins, and zucchini?

Of course, the traditional American answer has been slaves.

We tried indentured servants, but the ungrateful bastards ran away.

We brought in Africans who had a harder time escaping, but Lincoln freed them in 1863.

After that we had to go to the end of the earth to bring in the Chinese and Japanese, but that game ended with the Chinese Exclusion Act, the Asiatic Barred Zone, and the Gentleman's Agreement with Japan, so we brought in Mexicans until that flow was ended (at least for a time) by Edward R. Murrow's Harvest of Shame television documentary in 1964.

You want more and cheaper fruit and vegetable options? That's only going to happen with more food importation or more mechanization. The age of agricultural slavery is over.