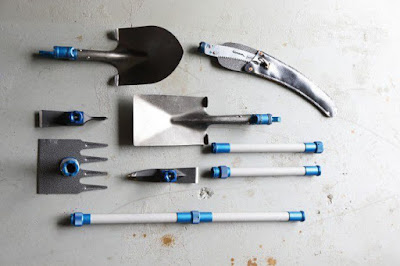 Not too many folks have the same tool needs as we do in the world of working terriers:   packable, light-weight, but indestructable, tools for serious dirt moving.

It turns out there is one group who does, however: the folks who make dirt bike trails far from the maddening crowds

Trail Boss makes a shovel, saw, hoe, and a mattock/pick combination build around a three- or four-piece handle with removable heads. It also has a collapsible rock bar. All parts of this kit are very expensive, but considering who is using them (serious trail builders) I suspect they work as advertised. 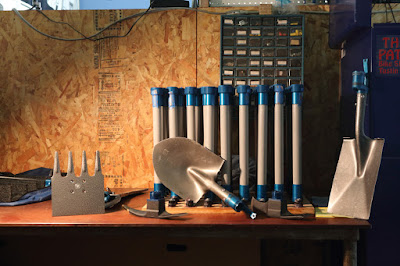 Smoke jumpers who parachute into fires, and other wild fire fighters use similar tools to lay down fire line. I have used and always seen the heavy one-piece versions, but compact, light tools as pictured would be huge benefit, particularly to smoke jumpers. -- TEC