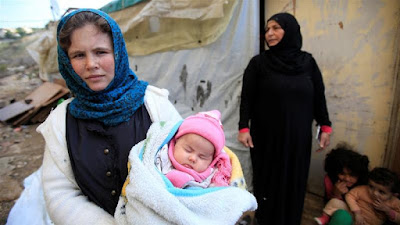 Simply posting this award winning poem, written by a Sudanese immigrant living in London, seems to have triggered the algorithms at Facebook, and landed me in "Facebook jail".

There is no method of appeal -- the whole thing is on automatic and is, at this point, broken to the core. Nazis, racists, Russians, anti-vaxxers, gun nuts, puppy peddlers, spammers, and sock puppets?  That's all fine. A poem about refugees? A bridge too far.

In truth, though I get 300,000-600,000 viewers a month on Facebook, I have been reconsidering the site as a huge waste of time, as well as a threat to democracy.

Facebook is not only a massive source of disinformation and political polarization.  It's more than an easy avenue for foreign powers to hijack elections.  More perniciously, it's a political steam valve -- a way for folks to take lazy action rather than substantive action.

I am convinced that without Facebook, our streets would be filled with protesters.  Instead, Facebook is full of cynical memes, anguished cries, and articles forwarded and "liked" by people we will never meet.


HOME by: Warsan Shire
no one leaves home unless
home is the mouth of a shark
you only run for the border
when you see the whole city running as well
your neighbors running faster than you
breath bloody in their throats
the boy you went to school with
who kissed you dizzy behind the old tin factory
is holding a gun bigger than his body
You only leave home
when home won’t let you stay.
no one leaves home unless home chases you
fire under feet
hot blood in your belly
it’s not something you ever thought of doing
until the blade burnt threats into
your neck
and even then you carried the anthem under
your breath
only tearing up your passport in an airport toilets
sobbing as each mouthful of paper
made it clear that you wouldn’t be going back.
you have to understand,
that no one puts their children in a boat
unless the water is safer than the land
no one burns their palms
under trains
beneath carriages
no one spends days and nights in the stomach of a truck
feeding on newspaper unless the miles travelled
means something more than journey.
no one crawls under fences
no one wants to be beaten
pitied
no one chooses refugee camps
or strip searches where your
body is left aching
or prison,
because prison is safer
than a city of fire
and one prison guard
in the night
is better than a truckload
of men who look like your father
no one could take it
no one could stomach it
no one skin would be tough enough
the
go home blacks
refugees
dirty immigrants
asylum seekers
sucking our country dry
n*****s with their hands out
they smell strange
savage
messed up their country and now they want
to mess up ours
how do the words
the dirty looks
roll off your backs
maybe because the blow is softer
than a limb torn off
or the words are more tender
than fourteen men between
your legs
or the insults are easier
to swallow
than rubble
than bone
than your child body
in pieces.
i want to go home,
but home is the mouth of a shark
home is the barrel of the gun
and no one would leave home
unless home chased you to the shore
unless home told you
to quicken your legs
leave your clothes behind
crawl through the desert
wade through the oceans
drown
save
be hungry
beg
forget pride
your survival is more important
no one leaves home until home is a sweaty voice in your ear
saying-
leave,
run away from me now
i dont know what i’ve become
but i know that anywhere
is safer than here

Bravo. I reposted your piece and the poem on FB just now, noted the irony, but did acknowledge that I know you are right about your assessment of FB and most other social network sites. We would be marching in the streets and should be. The partisanship is bad, but the push to apathy is even more dangerous. Bravo, Sir. I like your info, but I more appreciate your nudge toward thought.

What an extraordinary poem. I wonder what they took umbrage with, specifically? I'm in total agreement with your assessment of Facebook's many, many faults. I've abandoned it in disgust several times, returning only to communicate with friends (mostly overseas) unwilling to communicate in any other way. I hope you don't abandon it entirely.

Just shared this on my news feed. Hope I don't get banned. I live in a small town in New Zealand. The local FB group is our main channel for information on road closures, used goods for sale or free, yoga classes, recommended electricians, lost and found dogs and cats, etc.