Notre Dame: The Fire and the Acorn 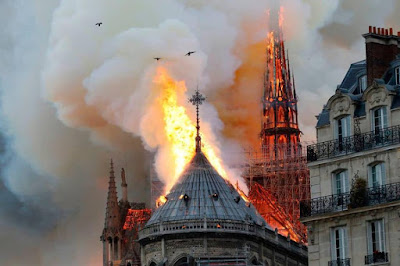 NOTRE DAME CATHEDRAL is on fire, and the wood structure inside has already been declared a total loss.

The ceiling of Notre Dame contained 13,000 oak trees cut in the 12th century; an entire forest cut and elevated into the air.

In the spirit of education and finding something good amid the ashes, let me recount a story of forests and foresight.

New College, Oxford, England is actually one of the oldest colleges in the word -- founded in 1379.

Like many colleges, it has a great dining hall with massive old-growth oak beams across the top. These beams are 45-feet long and as large as two feet square on their ends.

A century and a half ago, a building inspector went up into the roof of the dining hall with a penknife and poked at the beams and found they were full of beetle bore.

This news was reported to the College Trustees, who met the news with dismay. Beams this large were very hard, if not impossible, to come by. Where would they ever get beams of this caliber again? One of the younger Trustees suggested there might be some large oaks on distant College lands, and why not consult the College Forester to see if any were available?

And so two of the Trustees went down to see the College Forester who lived very far away and had only once set foot on the college campus himself.

After introducing themselves to the College Forester, the Trustees asked if, perhaps, there might be one or two oaks in the woods that were large enough to be used to sister two or three of the weakest beams in the hall.

The Forester clucked a bit and said, “Well sirs, we was wonderin’ when you’d be askin’.”

It turned out that when the College was founded thousands of oak trees had been planted to replace building beams when they became beetle-y, because oak beams always become beetle-y in the end.

This plan, set out in 1450, had been passed down from one College Forester to the next for over four hundred years. Each generation of Foresters would tell the next: “You don’t cut them oaks. Them there is for the College Hall.”

And so, when the inevitable attack of time and beetles did show up, an ancient stand of Oaks had already been waiting for more than 200 years.

With the fire at Notre Dame still raging, now is a good time to take stock.

What do we cherish, and what are we doing today to make sure those things continue for the next generation to come?

All of us are truly fortunate.

We stroll through parks, train stations, and libraries financed and built by others who dreamed not only big, but planned for generations to come.

On a hot day we rest in the shade of trees we did not plant.

In times of crisis we may go to a house of worship that waited 100 years or more for us to enter.

When pressed, we all recognize that we stand on the shoulders of giants.

But do we also give full weight to the fact that we also stand on the shoulders of common people who laid train tracks, planted trees, and hewed the pews on which we sit today?

Too many of us wait for a Big Win to "pay it forward," but in truth the great buildings of the world were not created in a day, but laid up one brick at a time, and paid for by common people who paid a penny on every dollar earned just to make it so.

A penny on the dollar.

It is not much.

And yet from such simple gifts flowed Notre Dame and everything we are today as a nation – and will be tomorrow.

As we approach the Easter season, think about the things you value, and make a "penny pledge" to help sustain those things, and pass them on to the next generation in the year ahead.

The absolute size of your contribution does not matter.

For some it will be small, for others massive.

Around the world, charity is not judged by size, but by percent.

If all you can afford this season is a single acorn, then plant that acorn carefully and with an open heart. Try to help the poorest of the poor and those least able to help themselves.

Not every acorn will grow to become an important beam at Oxford, or the new roof of Notre Dame, but every beam at Oxford and Notre Dame began its life as a simple acorn.

Every person at the bottom can climb a little higher with the help of a rung you help put in place.

The oaks which will provide the beams to rebuild Notre Dame are ready and waiting, too. They were planted at Versailles when the oaks were cut there to rebuild the cathedral after it was sacked during the Revolution.

planting old growth tree species, or any trees really, are also a great thing that the average person can do right now, to combat climate change.