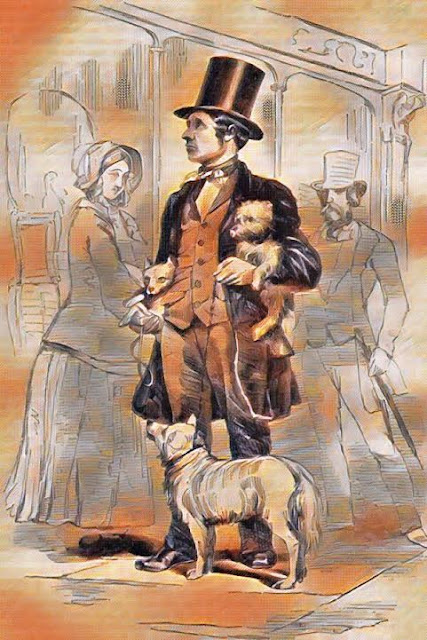 Henry Mayhew gives us a window into the world of dogs prior to the advent of the Kennel Club.

In London Labour and the London Poor he is careful to note that dog dealers are not the same people as dog stealers or "restorers" of kidnapped dogs, of the kind illuminated here, noting that:


[T]he street-sellers were not implicated in the thefts or restitution of dogs, 'just except,' one man told me, 'as there was a black sheep or two in every flock.' The black sheep, however, of this street- calling more frequently meddled with restoring, than with 'finding.'

Another street dog-seller, an intelligent man, — who, however, did not know so much as my first informant of the state of the trade in the olden time, — expressed a positive opinion, that no dog-stealer was now a street-hawker ('hawker' was the word I found these men use). His reasons for this opinion, in addition to his own judgment from personal knowledge, are cogent enough: 'It isn't possible, sir,' he said, 'and this is the reason why. We are
not a large body of men. We stick pretty closely, when we are out, to the same places. We are as well-known to the police, as any men whom they must know, by sight at any rate, from meeting them every day. Now, if a lady or gentleman has lost a dog, or it's been stolen or strayed — and the most petted will sometimes stray unaccountably and follow some stranger or other — why, where does she, and he, and all the family, and all the servants, first look for the lost animal? Why, where, but at the dogs we are hawking?

No, sir, it can't be done now, and it isn't done in my knowledge, and it oughtn't to be done. I'd rather make 5 shilling on an honest dog than 51 on one that wasn't, if there was no risk about it either.' Other information convinces me that this statement is correct. 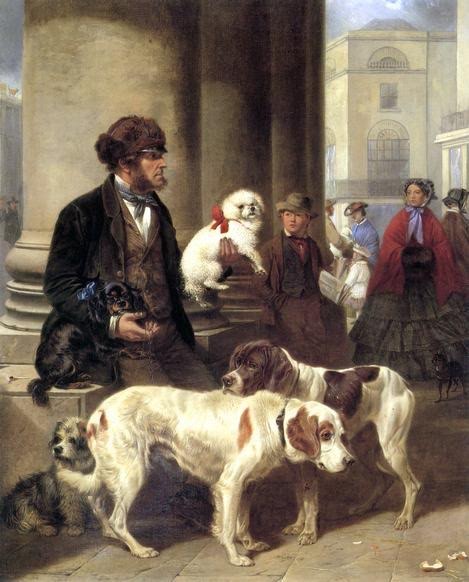 Mayhew goes on to note that dog-sellers are focused on a very particular type of client:

There is one peculiarity in the hawking of fancy dogs, which distinguishes it from all other branches of street-commerce. The purchasers are all of the wealthier class. This has had its influence on the manners of the dog-sellers. They will be found, in the majority of cases, quiet and deferential men, but without servility, and with little of the quality of speech; and I speak only of speech which among English people is known as 'gammon,' and among Irish people as 'blarney.' This manner is common to many; to the established trainer of race-horses for instance, who is in constant communication with persons in a very superior position in life to his own, and to whom he is exceedingly deferential. But the trainer feels that in all points connected with his not very easy business, as well, perhaps, as in general turf knowingness, his royal highness (as was the case once), or his grace, or my lord, or Sir John, was inferior to himself; and so with all his deference there mingles a strain of quiet contempt, or rather, perhaps, of conscious superiority, which is one ingredient in the formation of the manners I have hastily sketched.


As for sporting dogs, such as working terriers and fighting dogs, they are sold a bit differently:

The way in which the sale of sporting dogs is connected with street-traffic is in this wise: Occasionally a sporting-dog is offered for sale in the streets, and then, of course, the trade is direct. At other times, gentlemen buying or pricing the smaller dogs, ask the cost of a bull-dog, or a bull-terrier or rat-killer, and the street-seller at once offers to supply them, and either conducts them to a dog-dealer's, with whom he may be commercially connected, and where they can purchase those dogs, or he waits upon them at their residences with some 'likely animals.'

A dog-dealer told me that he hardly knew what made many gentlemen so fond of bull-dogs, and they were 'the fonder on 'em the more blackguarder and varmint-looking the creatures was,' although now they were useless for sport, and the great praise of a bull-dog, 'never flew but at head in his life,' was no longer to be given to him, as there were no bulls at whose heads he could now fly.

Another dog-dealer informed me — with what truth as to the judgment concerning horses I do not know, but no doubt with accuracy as to the purchase of the dogs — that Ibrahim Pacha, when in London, thought little of the horses which he saw, but was delighted with the bull-dogs, 'and he weren't so werry unlike one in the face hisself,' was said at the time by some of the fancy. Ibrahim, it seems, bought two of the finest and largest bull-dogs in London, off Bill George, giving no less than 101 pounds for the twain. The bull-dogs now sold by the street-folk, or through their agency in the way I have described, are from 5 pounds to 25 pounds each. The bull-terriers, of the best blood, are about the same price, or perhaps 10 to 15 per cent lower, and rarely attaining the tip-top price.

The bull-terriers, as I have stated, are now the chief fighting-dogs, but the patrons of those combats -- of those small imitations of the savage tastes of the Roman Colosseum, may deplore the decay of the amusement. From the beginning, until well on to the termination of the last century, it was not uncommon to see announcements of 'twenty dogs to fight for a collar,' though such advertisements were far more common at the commencement than towards the close of the century. Until within these twelve years, indeed, dog-matches were not infrequent in London, and the favorite time for the regalement was on Sunday mornings. There were dog-pits in Westminster, and elsewhere, to which the admission was not very easy, for only known persons were allowed to enter. The expense was considerable, the risk of punishment was not a trifle, and it is evident that this Sunday game was not supported by the poor or working classes. Now dog-fights are rare. 'There's not any public dog-fights,' I was told, 'and very seldom any in a pit at a public-house, but there's a good deal of it, I know, at the private houses of the nobs.' I may observe that 'the nobs' is a common designation for the rich among these sporting people.

There are, however, occasionally dog-fights in a sporting-house, and the order of the combat is thus described to me: 'We'll say now that it's a scratch fight; two dogs each have their corner of a pit, and they're set to fight. They'll fight on till they go down together, and then if one leave hold, he's sponged. Then they fight again. If a dog has the worst of it he mustn't be picked up, but if he gets into his corner, then he can stay for as long as may be agreed upon, minute or half-minute time, or more than a minute. If a dog won't go to the scratch out of his corner, he loses the fight. If they fight on, why to settle it, one must be killed — though that very seldom happens, for if a dog's very much punished, he creeps to his corner and don't come out to time, and so the fight's settled. Sometimes it's agreed beforehand, that the master of a dog may give in for him; sometimes that isn't to be allowed; but there's next to nothing of this now, unless it's in private among the nobs.' 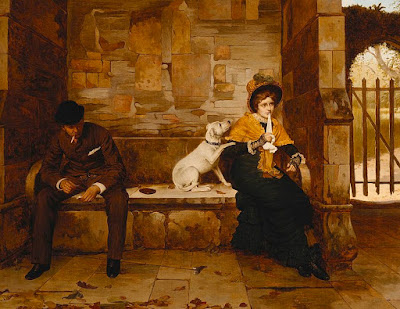 Dog sellers did a big business in lap spaniels but, as Mayhew notes, by his era (1851) the bulldog had already collapsed into a shadow of his former self.  As I noted in an earlier post about molosser breeds:

In England, catch dogs began to disappear with the rise of the Enclosure Movement of the 18th Century. As the Enclosure Movement pushed people off the land and into squalid cities and towns, boredom set in and (in the absence of television, movies, video games, and real theatre), spectacles pitting dogs against bulls, pigs, bears and even monkeys were created for entertainment, much as the Romans had done centuries before.

The dogs used for pit work were different than the catch dogs used a century or two earlier. Pit dogs were quite variable in size, and the goal was to match the dog with its opponent (dog or beast) by weight or sense of threat. While catch dogs had to be fast to catch running stock, and tended to weigh 50-80 pounds (large enough to turn a bull or stop it, but not so large as to be slow), pit dogs weighed anywhere from 10 pounds, in the case of a small ratting terrier, to as much as 140 pounds or more in the case of bear-fighting dogs. Encounters were brief, and no nose at all was required.

Other than rat pits and cock fights, animal baiting spectacles were never common, and were banned altogether by 1835. Though secret underground dog fighting and badger baiting contests continued, they were rare, episodic, and genetically maladaptive. When police raided dog fights, the dogs were killed. When participants went to jail for other reasons, dogs disappeared. And in the era prior to antibiotics, "successful" fighting dogs often died from wounds inflicted in the ring.


As for the famous bulldog yard of Bill George, mentioned by Mayhew above, this had started out as "Ross and Mangles," the best source for fighting dogs in all of England, but when owner Bill White died, it was taken over by Bill George who embraced a different model following the ban on dog fighting in 1835. George's dogs fell into several distinct types, including bow-legged wrecks called "English" bulldogs today (and never mind if they are mostly Chinese Pug) and over-large heavy-boned "front of the shop" dogs designed to intimidate. A complete write up of this transition, and its role in story is told in Who Supplied the Hound of the Baskervilles?.