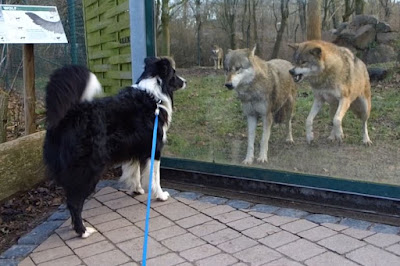 There is nothing more amusing than dog food debates among the counter thumping ignorants that engage in them.

As I have noted a hundred times, though dog food is a multi-billion dollar a year business, no evidence exists that any dog food is better than another. None. Zero. Nyet. Empty set.

My favorite brand of idiots are those who start dog food debates with "But wolves eat...."

Axelsson and his colleagues analyzed the entire genetic codes of 12 wolves from across the globe, as well as the genomes of 60 individual domestic dogs from 14 different breeds. They pooled the domestic pups' results so that the genetic traits of individual breeds wouldn't skew the findings and then compared the pet dogs to the wolves, looking for places where the genomes diverged.

This game of "spot the differences" led the scientists to focus on 36 different regions. They found that 19 of these regions contained genes crucial for brain functioning, including eight important for the development of the nervous system.

It was no surprise to see differences in brain genetics, Axelsson said, given that dogs had to modify their behavior to fit into human society. What did surprise the researchers, however, were 10 regions held genes involved with diet, specifically the breakdown of starches. Humans are well-equipped for starchy diets: Human saliva contains an enzyme called amylase, which starts breaking down starches as soon as food hits the mouth. Dog drool doesn't have this advantage, but dogs do excrete amylase from their pancreases, allowing for the digestion of starches in the gut.

The researchers found that dogs have more copies of a gene called AMY2B, crucial for amylase production, than wolves. And in dogs, this gene is 28 times more active in the pancreas than in wolves.

Dogs also showed changes in specific genes that allow for the breakdown of maltose into glucose, another key starch digestion step, and in genes allowing for the body to make use of this glucose.


So wolves are not dogs. Similar, in some respects, but different.

You will find dogs and lions and tigers and bears at the circus leaping through hoops, but not true wolves.

You will find dogs pulling sleds and carts, but not wolves.

Wolves are not dogs.

But are they similar? Oh sure.

Both are pack animals with pecking orders. But so are chickens.

Both are opportunistic feeders. But so are chickens.

If a wolf is lucky enough to bring down a deer or an elk, they will tend to rip at the carcass starting with the easy access at the anus and burrow inward and upward to eat the stomach, liver, belly fat, and heart.

Wolves, like dogs and people, crave fats. If a wolf catches a familiar rabbit, it will probably eat it whole, same as a large dog, but if a fresh rabbit is found dead on the ground next to something as strange as a big lump of whale fat, it will eat the whale fat first. Fat is rare, and you take it when you can in as large an amount as you can.

And what of the wolf that catches neither rabbit nor deer nor elk? They will eat whatever they can, from acorns and grass to wild berries and trash. Ever watch a dog? They will do the same thing.


So, bottom line: Wolves are not picky eaters nor are they pure carnivores.

Now, we get to the fun part. Do you know what they feed wolves in zoos? Dog food!

The Association of Zoos & Aquariums Nutrition Advisory Group offers the following advice on the feeding of red wolves:

Feeding requirements of red wolves have generally not been a problem in the RWSSP, as long as good quality commercial (dry) dog food is provided. Because of the number of commercial foods made, their availability, and cost it is difficult to recommend a specific brand. Wolves maintained in Tacoma have done well on food with label guarantees ranging from 22-28% protein, 8-18% fat, and 2-4% fiber. Vitamin supplements for red wolves are normally not required. Adding commercial carnivore log to dry chow may be needed to encourage some wolves to eat, although should not be the primary component of their feed.


So what do they feed wolves in zoos? Dog food. And what kind? It does not really matter (though Purina ProPlan gets a shout-out here) And how long do these zoo wolves live? A hell of a lot longer than those in the wild (and with better teeth too).

So feed your dog like a wild wolf (with the diseased rectum of a downer cow) or feed it like a zoo wolf (with Purina), but either way it will be fine.

The dog food fanatics say feed your dog like a wolf but they will not feed their dogs "meat by products" which is exactly what wolves eat first!

".....easy access at the anus and burrow inward and upward to eat the stomach, liver, belly fat, and heart."